The resolution of a legal dispute between a Chinese company and President Barack Obama is unlikely to change the role of a US committee that reviews the impact on national security of acquisitions of US companies by a foreign country, according to lawyers.

On Wednesday, legal representatives for Ralls Corp, an affiliate of China's Sany Group Co, and the Committee on Foreign Investment in the United States (CFIUS) agreed to drop lawsuits that each had filed over a 2012 decision that barred Ralls from acquiring interests in four wind-farm projects in Oregon. Ralls is a US-based corporation owned by two Chinese nationals.

Following a recommendation from CFIUS, President Obama issued a presidential order in 2012 blocking Ralls from investing in the wind farms, citing national security risks because the installations were near a naval weapons systems training facility. It marked the first time in 22 years that a US president blocked a foreign acquisition in such a manner. In 2014, a US federal appeals court ruled that the administration had failed to give constitutional due process to Ralls.

Ralls' legal counsel, Bancroft PLLC, said in a statement that Ralls can now sell the four properties to a third-party purchaser chosen by Ralls to whom the US government had previously objected. The settlement also acknowledges that CFIUS has determined that Ralls has engaged in acquisitions that have not raised national security objections, and that Ralls is welcome to submit future investments to CFIUS for review.

CCTV reported that the third-party purchaser was Dr. Xiuexin Tang.

Lawrence Ward of Dorsey & Whitney LLP in Seattle said in an e-mail that the settlement will still result in Ralls selling its interests. 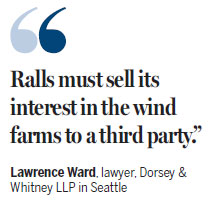 "Ralls must sell its interest in the wind farms to a third party. In other words, the original decision by CFIUS stands - that Ralls acquiring the wind farms would have an impact on US national security that could not be resolved," he wrote in an e-mail.

"Instead the parties reportedly chose to settle the matter before the court ruled on the ultimate legal issues. In other words, there is nothing that has 'legally' changed with respect to the CFIUS review and investigation process ... " noted Ward.

Ward said it's possible that another foreign company will one day find itself in a situation similar to Ralls. "However, Ralls is only one of two foreign companies that have ever made it to the point where the president issued an order. The vast majority of transactions reported to CFIUS are cleared.

"Only one other company has ever found itself in Ralls shoes," he wrote. "So there is very limited likelihood that many companies will ever have the opportunity to legally challenge the CFIUS process."

Noel Francisco of the Jones Day law firm in Washington said the agreement was good for Ralls.

"It allows Ralls to address CFIUS's concerns in an orderly way and also clarifies that Ralls may pursue additional investments in the US as long as those investments do not undermine US national security," he wrote.