Hollywood goes out with a whimper in 2015

The world's second-largest movie market used to be a virtual sure-bet for US-produced movies, but a surge in the popularity of domestic-made films in China and other factors are giving the make-believe world of Hollywood a dose of reality, reports in New York.

The latest installment of Star Wars opens in China next month, and the US movie industry is looking for the film to give it a big box-office revenue boost in the world's second-largest movie market after a 2015 that could be the worst year in box office receipts for Hollywood since 2008.

Analysts predict that Star Wars: The Force Awakens will take in about $277 million when it opens in China. The seventh movie in a near 40-year-old franchise passed Jurassic World to set a global opening weekend record of $529 million, but was not able to secure a release date in China until Jan 9.

Disney has made a major marketing push for the movie, including a premiere with the film's stars in Beijing, staging 500 model Stormtroopers on the Great Wall, Star Wars exhibitions at malls across the country and ads featuring Chinese pop star Lu Han as an honorary Jedi "ambassador" for the movie.

Even though Hollywood had four of the top-10 films in China this year, box office receipts were lower than expected. Through November, total Chinese box-office revenue increased 48 percent over 2014, with Hollywood films taking 41 percent and domestic films 59 percent.

But because December is a black-out period for new foreign films and only Chinese films are released, that 41 percent could be pushed below 2008's 39 percent, which was the lowest in Chinese box-office history.

The reality in China that the world of make-believe in Hollywood is facing is that the Chinese market is no longer a guarantee of success for either new releases or underperformers in the US market. And US studios are in a scramble to stop shrinking box-office revenue. They have been partnering with Chinese studios to tap into the growing popularity of Chinese-language movies, seeking Chinese investors, using Chinese stars and changing story lines.

"There certainly is [some waning interest in Hollywood movies] because if you get the same old stuff over and over again, it's going to wear you down," said Stanley Rosen, professor of politics at the University of Southern California and an expert on the Chinese film industry.

Rosen said that what's happening with Chinese audiences and Hollywood films is not unlike what American filmgoers experienced with Chinese films after the success of Ang Lee's Crouching Tiger, Hidden Dragon. After winning several awards, several other high-profile martial-arts films made their way to America: Hero, House of Flying Daggers, Fearless.

"After a while people began to say, 'Well don't you have any other stories to tell? It's the same stuff over and over again.' So there is some of that going on in terms of the Hollywood films in China as well," Rosen said.

An American studio executive working with both US and Chinese studios, who asked not to be identified by name, said that Hollywood's performance in 2015 has been "very concerning."

US films that were released during the first-half of the year showed tremendous potential: the top-grossing Hollywood movie was Furious 7, taking in $390 million. Marvel's Avengers: Age of Ultron, Furious 7, and Jurassic World all drew huge audiences and each earned more than $200 million at the box office.

But movies that were released in the fall that "really should have done well" - like the latest James Bond film Spectre and Matt Damon's The Martian - have yet to earn more than $100 million, the executive said. 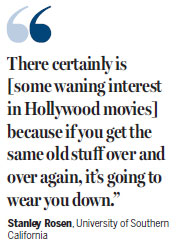 The Bond film broke the record for biggest opening-day release with $14 million, and earned the largest weekend total at $48 million, but faded from the box office after its first week. The film's star Daniel Craig had promoted the movie heavily in China leading up to the release, making an appearance on a Singles Day celebration with Alibaba's Jack Ma that aired on TV and was viewed by an estimated 500 million people.

"As somebody who's really trying to help the US get through proper collaborations - the kind of content and content potential in regards to revenue - to China, to the best level possible, it's very concerning," the executive said.

"I think you're seeing a real apathy towards US films in China right now. We're not exactly sure what that reason is. Is it due to manipulation on box office receipts? Is it due to release date strategies by CFG [China Film Group] and SARFT [State Administration of Radio, Film, and Television]?" he said.

"Is it just due to just the fact that the movies are just not that good? Is it due to the fact that China is now more interested in their own movies? They were all excited with Western film. We got in there; we did great for a decade, and then they figured out how to make the secret sauce that works for their own market, and now they're just watching their own films? We don't really know the answer, but it's really concerning," he said.

Daniel Loria, senior overseas analyst for BoxOffice.com said that Chinese moviegoers are being pickier about what they watch.

"I think there's a sort of insulting arrogance by the way some writers portray Chinese audiences as this monolithic mass that's interested in big budget Hollywood fare," he said. "The last three years have resolutely proved otherwise. Chinese audiences are discerning and diverse, and I think we'll continue to see that in 2016."

Now US studios are seeking to tap into the growing popularity of local-language films by partnering with Chinese studios to produce content for the domestic market.

Warner Brothers and China Media Capital announced in September that they signed a joint venture to make and distribute Chinese films, but did not specify how many movies they will be releasing. Next year, DreamWorks Animation and Oriental DreamWorks's co-produced Kung Fu Panda 3 will be released around Lunar New Year, with a Chinese version for audiences in China and an English version for viewers in the US and elsewhere.

Aynne Kokas, professor of media studies at the University of Virginia, said that while there is not necessarily waning interest in American movies, there is a "narrow band of interest" on major global franchises and that it coincides with interest in seeing local stories that more accurately reflect the concerns of the Chinese.

"If you see movies like Lost in Hong Kong, they tell stories that engage the cultural interests and background of people in China, much more than just a comedy or drama that was made in Hollywood and is being exported there. And that's only reasonable - and that's part of why the co-production deals have been developing, it's to build up the local industry and to facilitate the growth of successful domestic movies," said Kokas, who is finishing a book on the relationship between Hollywood and China.

US studios are also working more with Chinese investors on films, hoping that partnering with key players in the Chinese film industry will give them more access to screens and distribution channels. Furious 7 got an investment from China Film Group, the country's largest importer and distributor of films, which USC's Rosen said helped the movie's box office performance.

"If China Film Group - which is in charge of importing and distributing films - is investing, you can be sure that you're going to get some very good dates and good theaters for your film to play out, because they're going to make money out of that," he said.

The latest installment of Mission Impossible starring Tom Cruise received investment from Alibaba's film subsidiary, and the movie went on to gross $136 million, the 10th-highest-grossing film in China this year.

But even with these partnerships and investment strategies, Hollywood studios should realize that the Chinese market is no longer a sure-fire market for movies to succeed in or even to help recoup losses from underperformance in the North American market, said BoxOffice.com's Loria.

"China is a huge market for Hollywood, but it is by no means a guarantee - and 2015 is a great example of that. I think it's a facile argument to say the cinema of the future is one aimed at cashing in on China - that simply isn't possible when local films are so competitive and with government intervention in the market," he said.

Loria said he expects US-China studio collaborations to continue, whether in developing Chinese-language or English films. "China is too important of a market to make assumptions of local tastes and customs, why not work with an experienced local partner?" he said.

In forming partnerships with local studios and others, Hollywood needs to be careful about projecting a "white man's arrogance" onto the Chinese market, said the studio executive who asked not to be named.

With co-productions on projects that are not necessarily Chinese-language films, some partnerships have hit snags, like the upcoming Zhang Yimou-directed film The Great Wall starring Matt Damon, which has reportedly gone over-budget.

"US-China co-productions still continue to falter and both sides have been unable to find the recipe for a successful film that plays well in both China and America," said Jonathan Papish, film and box office analyst for China Film Insider. But he said that he expects more partnerships next year in distribution, exhibition and merchandising, as well as in regular investment.

A new bilateral agreement between the Motion Picture Association of America and the Chinese government "eased some of the tensions Hollywood felt about the growing relationship," and while nothing was solidified, it was a good sign that China promised international parties to audit its box office and to make sure the numbers added up, Papish said. The agreement was signed during President Xi Jinping's state visit to the US at the end of September.

As for numbers adding up at the box office in China, Hollywood is counting on the force being with it next month. And an analysis by Reuters of posts on the popular microblog Sina Weibo showed Star Wars has been mentioned around 700,000 times since the start of December, outpacing other big hit Hollywood releases in China this year. 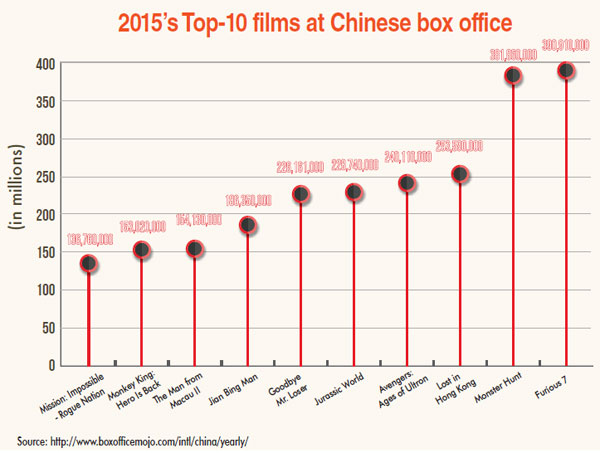