A California data-disaggregation bill has caused a backlash among some Chinese Americans in the San Francisco Bay Area for fear that Chinese college admission rates would be harmed.

But supporters say the law is critical for policymakers to address disparities among Asian-American subgroups based on accurate disaggregated data.

Assembly Bill 1726, the Accounting for Health and Education in API (Asia Pacific Islanders) Demographics Act, calls for data to be collected for enrollment and graduation rates, disease rates, health insurance coverage, birth, and death rates so as to respond to their unique needs.

It was passed last week by the Education Committee and awaits approval by the Health Committee.

"We believe it is more focused on education so they have data supporting the affirmative action and make preferential policies in college admission for some Asian-American subgroups, like Malaysians and Cambodians," said Kai Zhu, a Chinese-American attorney based in the Bay Area. "Therefore, the Chinese Americans, Indian Americans or Korean Americans, those so called 'over-represented' groups, will become a target".

"We should promote meritocracy. Any race-based preferential policy is not only unreasonable but also unconstitutional," he added.

Zhu and dozens of other members of the Chinese community rallied on March 25 outside the Cupertino office of Evan Low, a Chinese-American assemblyman on the education committee who voted for the bill, to protest against AB 1726. 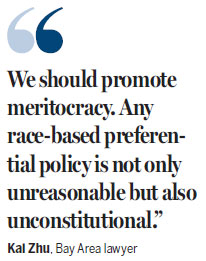 Low did not appear at his office. Jason Baker, Low's district director, refused to comment or disclose his whereabouts, citing "security reasons".

David Chiu and Phil Ting, the two other Chinese-American Assembly members who sponsored the bill, both declined to comment.

Chinese for Affirmative Action (CAA), a San Francisco-based group, said in a statement on March 25: "It is legally and factually inaccurate to conflate AB 1726 with any issues related to college admissions criteria."

AB 1726 is a critically needed effort to unmask Asian-American and Pacific Islander (AAPI) communities as a monolithic whole, because certain subgroups' needs and challenges are otherwise hidden, said CAA.

"For example, certain AAPI subgroups are more susceptible to certain health risks and more accurate data is desperately needed," the statement reads. "The most dramatic increase in uterine cancer has been among Chinese women, while Korean men and women have some of the highest incidences of colorectal cancer rates."

"In education, we make decisions every day to help students learn," Michael Chang, vice-president of the Santa Clara County Board of Education said in the statement. "Having detailed, disaggregated information allows us to focus teaching and support services to meet the different needs of different populations."

California is home to the nation's largest Asian-American community and second-largest Native Hawaiian and Pacific Islander (NHPI) community - one in seven Californians are either Asian American or NHPI. They are growing three times faster than the state's overall population growth rate, according to a 2015 report by the Campaign for College Opportunity.