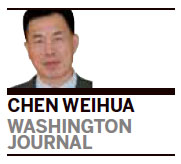 When the president of the Republic of Korea, Park Geun-hye, meets US counterpart Barack Obama at the White House on Tuesday, the Hollywood thriller Olympus Has Fallen will still be playing in theaters across America.

The movie is about a former Secret Service agent battling a North Korean-led group that has stormed the White House, killed the visiting South Korean prime minister and taken as hostages the US president and several senior officials. The motive for the attack appears to be reunification of the Korean Peninsula, withdrawal of US forces and destruction of all US nuclear weapons.

For Obama and Park, the meeting is expected to focus on the crisis surrounding the latest nuclear test by the Democratic People's Republic of Korea. That took in mid-February, just two weeks before Park took office. This is her first overseas trip as president.

Publicly, the two leaders are expected to send a strong message of unity regarding the DPRK. The campaign message that Park ran on, however, of pursuing a trust-building process with Pyongyang, is somewhat different from the tough stance advocated by Washington.

After exchanges of stern rhetoric and military posturing since the February nuclear test, tensions have begun to subside.

However, a resumption of dialogue is unlikely for now. The US insists on denuclearization as a prerequisite for discussion, and the DPRK has put forward several preconditions that Washington and Seoul find unacceptable.

Lately, the world's attention has been on the withdrawal of the last group of ROK personnel from Kaesong Industrial Park, a South-North joint venture near the peninsula's demilitarized zone.

Scott Snyder, a senior fellow at the Council on Foreign Relations, described the park as "the last remaining symbol of inter-Korea rapprochement" and called its shutdown a "loselose scenario".

The US visit by President Park will be about more than the DPRK, however.

The ROK side will host an official dinner on Tuesday to mark the 60th anniversary of its alliance with the US.

Her trip also comes a year after the countries finalized a free trade agreement. Bilateral trade exceeded $58 billion in 2012, making the US the second-biggest trading partner for the ROK, far behind the $256 billion a year between the ROK and China.

During Park's stay, US officials are likely to reiterate an invitation for the ROK to join negotiations to form the Trans-Pacific Partnership, a regional free-trade zone. Seoul has so far resisted participation in the TPP talks.

The 61-year-old daughter of former president Park Chung-hee will also lead the biggest-ever delegation of ROK business leaders to the US. The 51-member group includes tycoons such as Samsung Electronics Chairman Lee Kun-hee.

Park and Obama will also discuss a bilateral 1974 nuclear agreement that's set to expire next year. Washington has opposed Seoul's proposal to acquire nuclear-fuel enrichment and reprocessing capabilities out of fear that this would undermine Obama's global nonproliferation agenda and make it harder to persuade the DPRK and Iran to abandon their nuclear programs.

The two presidents are also expected to discuss sharing the cost of US forces that have been stationed in the ROK since the Korean War.

Michael Green, an analyst at the Center for Strategic and International Studies, believes the two leaders will confirm that the US is going to transfer operational control on the Korean Peninsula in wartime to the ROK. Right now, Seoul has peacetime operational control while the US retains wartime control.

Public anger in the ROK and China arose after a recent visit by Japanese lawmakers and cabinet ministers to the Yasukuni Shrine, which memorializes Japan's war dead including convicted World War II criminals, and remarks about Japanese aggression during the war by Prime Minister Shinzo Abe.

The New York Times and the Wall Street Journal both published opinion pieces critical of the Japanese actions and comments, but Green said US officials regard the matter as one in which they can't try to act as moderator.

On Wednesday, Park, like five of her presidential predecessors, will address a joint session of Congress. She will also attend a business group's luncheon and meet with Koreans living in the US.

Before arriving in Washington, Park will have a two-day stay in New York to meet with United Nations Secretary-General Ban Ki-moon and others. After Washington, she will fly to Los Angeles and have lunch with Mayor Antonio Villaraigosa before returning to Seoul.

Victor Cha, another CSIS scholar, said Park has a tough act to follow in Lee Myungbak, who forged a friendship with Obama.

"They, I think by all accounts, had a unique relationship," Cha said. "The president really did like Lee Myung-bak, and so I think there will be an effort to try to build or replicate, perhaps in a different fashion, the same sort of personal relationship."