US diplomacy nudges aside tough talk toward DPRK 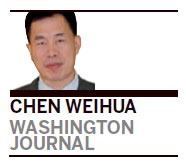 In place of the rhetorical fire from each side a few weeks ago, the United States has begun using diplomacy and military drills to try to defuse tensions with the Democratic People's Republic of Korea.

On Monday, the US and the Republic of Korea began two days of joint naval exercises off the east coast of the Korean Peninsula featuring a nuclear-powered aircraft carrier, the USS Nimitz.

As expected, the annual naval drill drew a strong protest from the DPRK. An article in its official Rodong Sinmun newspaper condemned the exercises as preparation for an invasion of the country and a dangerous, reckless move.

"The latest maneuver is dangerous because it comes right after South Korea and the United States concluded the annual Foal Eagle military drills all across the Korean Peninsula," it said, referring to a March-April exercise, involving US bombers, to which Pyongyang reacted with threats of "nuclear war".

In response to an ROK appeal for the resumption of dialogue, the DPRK had set several preconditions, including cancellation of Foal Eagle. On the diplomatic front, Glyn Davies, the US special representative for North Korea policy, on Sunday began a weeklong trip that will take him to Seoul, Beijing and Tokyo.

On Wednesday and Thursday, Davies will meet senior Chinese officials, including Wu Dawei, China's special envoy for the Korean Peninsula and chairman of the suspended Six-Party Talks.

After arriving in Incheon, South Korea, on Monday, the American diplomat said his meetings in China would focus on steps that officials there have been taking, "to see if there are not more ways that we can send very strong, united signals to North Korea that it is time to really return to the path of denuclearization and begin to take steps to demonstrate that they are serious about the intent to get back to diplomacy".

"I think that is a very interesting and potentially important development that the steps are being taken by a number of Chinese banks," he told reporters in Incheon.

Davies said it appears Chinese officials' thinking about the DPRK "continues to evolve".

"We will see what it means and we will see whether this signifies any kind of real shift in how the Chinese are operating. But I find it quite interesting, it is hopeful, and I cannot wait to learn more from Wu Dawei and colleagues in Beijing," said Davies, who became Washington's envoy on North Korea in late 2011.

The diplomat said, however, that the DPRK's relative quiet of late doesn't mean tensions have necessarily abated.

"I think easing tension and making diplomatic progress will come when North Korea begins to live up to its obligations and to meet its expectations and gets back on the path of diplomacy and denuclearization," he said.

Last week, news reports cited US officials as saying the DPRK had moved two ballistic missiles from launch sites on the country's east coast and further toned down its rhetoric.

On Monday, state media reported that the country's defense minister, Kim Kyok-sik, had been replaced by Jang Jong-nam, a relatively unknown army general.

Western analysts said the choice of Jang to head the People's Armed Forces in place of the hard-line Kim is most likely a move to consolidate power by leader Kim Jong-un rather than a sign that Pyongyang is softening its positions.

Davies' trip this week is the latest example of diplomatic activity regarding the Korean Peninsula. The ROK's president, Park Geun-hye, was in the US for five days last week, signaling unity between her country and the US toward the DPRK but also openness to diplomatic engagement.

Many Chinese still believe the US has a hidden agenda of pursuing regime change in the DPRK. China would prefer that its neighbor switch to a path of economic reform and opening-up, as China has done since the late 1970s.

Some in China also worry that a collapse of the DPRK would spur an influx of millions of refugees into their country while serving US geopolitical interests. Washington's much-discussed strategic rebalancing, or "Asia pivot", is regarded by many Chinese as an effort to contain China.

Davies, speaking on Monday in Incheon, was asked about possible differences between US and ROK attitudes toward Japan. The DPRK, he said, "is too important an issue" to get drawn into some of these other ongoing questions" in the region.

During her US visit, President Park several times expressed frustration over Japanese officials' conduct regarding their country's past militarism.