Korean Peninsula will be back in the spotlight 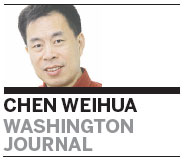 While tensions in Syria and exposure of the US' giant spying program have taken over the headlines that were dominated by the Korean Peninsula not long ago, the week ahead will see a host of activity back on that diplomatic front.

In Beijing, Vice-Foreign Minister Zhang Yesui, who was China's ambassador to the US until three months ago, will meet Kim Kye-gwan, the first deputy foreign minister of the Democratic People's Republic of Korea (DPRK), on Wednesday in a bilateral strategic talk on ties and the situation on the peninsula.

Kim will be the second senior DPRK official to visit China in recent months, following Vice-Marshal Choe Ryong-hae. Choe visited Beijing in late May and met Chinese President Xi Jinping, about a week before Xi started his Latin America and US trip.

At the same time, UN Secretary General Ban Ki-moon will also visit China on Tuesday to exchange views with Chinese officials on the Korean Peninsula.

Ban has praised China's recent efforts in defusing tensions on the peninsula. "I would like to have more in-depth discussions with President Xi Jinping and other leaders on how China can contribute further to the reduction of tension on the Korean Peninsula," Ban, a Republic of Korea national, told Xinhua News Agency.

Meanwhile, diplomatic efforts are also in full swing in Washington, where US Special Representative for North Korea Policy Glyn Davies will meet Japanese and ROK envoys to exchange views on a wide range of issues related to DPRK, according to a US State Department announcement.

Davies, who visited China, Japan and ROK last month, will hold bilateral meetings on Tuesday with ROK's Special Representative for Korean Peninsula Peace and Security Affairs Cho Tae-yong and Japanese Ministry of Foreign Affairs Director General for Asian and Oceanian Affairs Shinsuke Sugiyama before the three convene for a trilateral talk on Wednesday.

Early on Sunday, DPRK proposed high-level talks with the US to ease tensions on the Korean Peninsula.

DPRK's Korean Central News Agency announced that sincere discussions can be held on issues such as easing military tensions, changing a truce treaty to a peace treaty and nuclear matters. However, it said DPRK does not want the US to set any preconditions for talks.

"(The US should) not lose the opportunity that is laid out and should actively agree with our resolute step and good intention," the statement by DPRK's National Defense Commission said.

In Washington, the mood has been wary. Many US officials believe DPRK's tactic is to offer talks after provocations to win concessions and then try again to raise tensions.

On Monday, US Statement Department spokeswoman Jen Psaki said the US is open to bilateral talks with DPRK as part of the Six-Party Talks process.

"But the key piece here is that they need to take credible steps to move towards concrete denuclearization," she said.

No one knows whether the US will accept DPRK's offer.

Last Tuesday, the first high-level talks between DPRK and ROK in years broke off a day before their formal start over the haggling of whether participating officials were senior enough.

Charles Armstrong, professor of history and director for Korean Research at Columbia University, told China Daily on Monday that it looks like all sides are preparing to return to multilateral talks.

Describing the collapsed talks last week between DPRK and ROK as "unfortunate," Armstrong said DRPK's reaching out to the US would have been next with or without Chinese pressure.

"Xi Jinping was probably trying to convince Obama to speak with North Korea as much as he was persuading North Korea to talk to the US," Armstrong said. "It is likely the US will respond positively to this overture from North Korea and we may have US-North Korea talks, possibly even a resumption of the Six-Party Talks, later this summer."

Some observers, including former US Labor Secretary Elaine Chao, believe that pressuring DPRK back to the negotiation table was a big gift Chinese President Xi gave to Obama when they met in Sunnylands, California, on June 7-8.

Both Chinese and US officials feel the two countries have shared interests on the Korean Peninsula and somewhat different approaches.

Chinese Ambassador to the US Cui Tiankai recently reiterated the country's stance on the Korean Peninsula as stability, peace and denuclearization. "The three elements are interrelated, you cannot have one at the expense of the other two," he told the Foreign Affairs magazine in an interview.

Tension on the Korean Peninsula escalated after DPRK conducted its third nuclear test in February, followed by an exchange of tough rhetoric and show of military force by DPRK on one side and ROK and the US on the other.