Abortion a growing concern in both the US and China 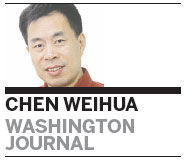 News in the past two days that Texas state senator Wendy Davis may run for governor of the Lone Star State has been a reminder of how controversial the issue of abortion still is in the modern day US.

Davis, a Democrat from Fort Worth, catapulted to national fame in June when she stood for nearly 12 hours in a pair of pink sneakers in the state senate to filibuster an anti-abortion bill, known as SB-5. The bill sought to ban abortions in Texas after 20 weeks and restructure the facility guidelines for abortion clinics in such a way that a majority of them would have had to shut down.

Davis eventually failed in her efforts as the state senate and house both passed the bill, which was later signed into law by Governor Rick Perry.

On Aug 1, Planned Parenthood announced the closing of three abortion clinics in Bryan, Lufkin and Huntsville.

However, Davis' action has reignited debate about women's rights and abortion, which is still a divisive issue in the US.

Texas has been traditionally a red state and the last Democrat to be elected governor there was Ann Richards in 1990.

Just last month, Missouri joined six other states that this year issued bans on abortion by telemedicine, a method popular among American women. It means that women can no longer take pregnancy-ending medication administered by a doctor remotely in a video conference.

Many abortion opponents have also called for a reversal of the Roe v Wade decision by the US Supreme Court that 50 years ago legalized abortion.

The estimated 1.06 million abortions performed in the US in 2011 - mostly on unmarried women - were down slightly from the previous two years.

According to the Guttmacher Institute, nearly half of all pregnancies among American women are unintended and four in 10 of these end in abortion. Meanwhile, about half of American women will have an intended pregnancy and nearly one-third will have an abortion by age 45.

While many US states take a tough stance on abortion through legislation, restrictions on abortions have been dramatically reduced in China in the past three decades.

Before the mid 1980s, most Chinese hospitals required women to provide a company letter for performing abortions. Now, no requirement is needed even for minors.

The fact that half of the 13 million are under the age 25 and many are college students has sparked an outcry among health and social experts over the sexual revolution sweeping Chinese campuses in the last decades while sex education, such as knowledge about contraception, lags far behind.

Still quite a few women opt for abortions for fear of violating the national family planning policy, which has been enforced strictly on employees of State-owned enterprises.

Though rhetoric about China's family planning policy was often one-sided in the West, reactions among the Chinese have been mixed.

Most Chinese support the family planning policy, regarding it as necessary to control the population in a nation of more than 1.3 billion people in a land roughly the size of the US.

This is in spite of the many abuses in previous decades that caused suffering for many women. But things have improved dramatically in recent years.

Just last year, several local government officials in Ankang, Shaanxi province, were punished for forcing a woman to have an abortion.

While China's family planning policy has often been described in the West as "one-child policy", the reality is that only 35.4 percent of married couples were in that situation in 2011.

The rest were all qualified for a second child for various reasons, such as when a couple lives in the countryside and their first child is a daughter, or when the couples are ethnic minorities or work as fishermen or miners, deemed as high-risk professions.

However, many and more couples, especially in big cities, have chosen to give up the privilege for a wide range of reasons, such as the high cost of education and living and the increasing job pressures.

There is also renewed debate lately over whether further loosening family planning policies might actually cause a population explosion.

Officials from the National Health and Family Planning Commission said last week that they are studying the issues to improve related policies.

Bo insists he did not abuse power