Robert Theleen, chairman of the American Chamber of Commerce (AmCham) in Shanghai, is leading a 12-member delegation in the US on a so-called "Doorknock" trip to advocate on key issues impacting US businesses in China and bilateral economic and trade relations.

They have been busy with dozens of meetings with senior officials from the administration, members of the Congress and pundits at think tanks. In a meeting with reporters from mostly mainstream US media, Theleen was straightforward, stating that US industry by and large is doing well in China.

He said that is the message he wants to deliver.

"If you want to make a more dramatic statement, I think in my life in Asia, which has been 40 some years, China represents US industry's first success story in East Asia since the end of World War II," said Theleen, who is also chairman and CEO of the investment banking firm ChinaVest Ltd.

Theleen saw the fast infrastructure development, growing income of the middle class, and rapid urbanization being the major drivers allowing US firms, large and small, to develop strategies from brand development and distribution to supply chain management and logistics.

While many expect his delegation to do a lot of complaining in Washington about doing business in China, Theleen said the complaints this year are more nuanced.

With 1,800 corporate members and 4,000 individual members, AmCham Shanghai is now the largest of its kind in Asia.

Unlike the usual media report, the top concern for doing business in China is no longer intellectual property, but the cost of doing business there, and the second is corruption in the government, which Theleen described as posing a risk for US firms to bump up against not only China's laws, but also US laws, namely the Foreign Corrupt Practices Act.

He believes the anti-corruption campaign by the new Chinese government will be good news for US firms in the long term. 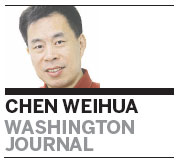 Theleen said the intellectual property rights issue hasn't gone away but more US firms have learned how to protect them. At the same time, a lot of US firms, such as those in the auto and chemical sectors, have been developing intellectual properties within China.

Peter Sykes, president of Asian Pacific for Dow Chemical, echoed the words by saying its research and development center in China created many intellectual properties that have global benefits.

During the three-day "Doorknock" trip, the AmCham delegation met on Monday with senior officials from the departments of commerce, treasury, state as well as the US Export-Import Bank and the US Trade Representative. On Tuesday, they went to Capitol Hill to talk to members of the Congress in a range of committees such as foreign trade, foreign affairs and banking.

Kenneth Jarrett, president of AmCham Shanghai, said the reason for opening such a center are the opportunities open in China for US companies. China is now the third largest export market for the US, trailing Canada and Mexico.

Jarrett, who was US consul general in Shanghai from 2005 to 2008, said a rising middle class and growing consumption has provided opportunities for American SMEs.

"For many American SMEs, they don't know where to begin," said Jarrett, adding that only one percent of American SMEs are now looking at exporting to the China market.