Can China and the US cooperate on fixing Afghanistan?

President Barack Obama on Tuesday told the United Nations General Assembly that all US troops had left Iraq, and next year, an international coalition will end its war in Afghanistan, having achieved its mission of dismantling the core of al-Qaida that attacked the US on Sep 11, 2001.

While Obama made it sound like mission accomplished, the Associated Press reported that gunmen on Tuesday tried to take over a small Sunni town in Iraq's west, sparking battles that left 11 people dead. And bombings and sectarian violence in Iraq continues to dominate world headlines.

In Afghanistan, an overnight Taliban assault on a border post in the southern part of the country left 11 police officers dead, while in the north, gunmen assassinated a district intelligence chief on his way to work, the AP reported on Monday.

Obama did not talk clearly about his vision for stabilizing Afghanistan after the country has been torn apart by a decade of war. And it was not surprising to see little enthusiasm from the audience on Tuesday when Obama argued for a tough UN Security Council resolution on Syria that might endorse the use of force.

Chinese Foreign Minister Wang Yi reminded the audience in his talk at the Brookings Institution in Washington DC on Friday that while people are now talking about Syria, it is likely that the whole world will be discussing Afghanistan after the US troop withdrawal.

Noting widespread concern over the situation in Afghanistan post-2014, Wang called for cooperation among China, the US and other countries linked to Afghanistan.

He cited the joint China-US training program for Afghan diplomats as a "small but very good example".

A group of 15 Afghan diplomats just finished two weeks of training in the US last week and will go to China later this year for the second leg of the program. It is the second year for the training program, which was first unveiled in May of last year at the China Foreign Affairs University in Beijing.

Ten days ago, US special representative for Afghanistan and Pakistan James Dobbins described the training program as "only one of several areas in which the US and China are collaborating in this kind of advisory and capacity-building for the Afghans". 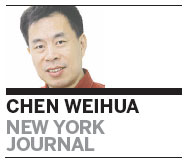 Wang also expressed China's willingness to contribute to the economic recovery of Afghanistan.

He described the political reconciliation as a tough issue that involves different ethnicities and religions. "But," Wang said, "I feel China and the US can still play a role, including joining hands with Pakistan and other neighbors of Afghanistan.

"Afghanistan is now in a phase of crucial transition. Whether the country can proceed smoothly with domestic reconciliation and reconstruction concerns the common interests of China, the US and other countries in the region," he added.

Wang believes China-US cooperation on Afghanistan has just started and there is great potential and room for enhanced cooperation.

"If our two countries can work with each other and bring out our respective strengths, we can turn the issue into a new highlight in our bilateral cooperation," Wang said.

Dobbins said the US has consulted regularly and closely with China on issues related to Afghanistan and Pakistan.

Acknowledging that China has a close relationship with Pakistan, Dobbins said that Chinese and American interests in this respect are largely aligned. "I think China, like the United States, is concerned about the growth of violent militancy in the region. China, like the US, would like to see Afghanistan stabilized and no longer becoming a source for potential instability in the region," said Dobbins, who was picked by Secretary of State John Kerry for the job on May 10 of this year and who also served as the George W. Bush administration's first special envoy to Afghanistan in the wake of the Sept 11, 2001 terrorists attacks.

Douglas Paal, director of the Asia program at the Carnegie Endowment, said Wang's comments on cooperation with regard to Afghanistan are welcome, if belated. "Neighbors like China must be more constructive in their approach if the Afghan homeland is not again to become a source of outside troubles, as in Xinjiang," Paal said.