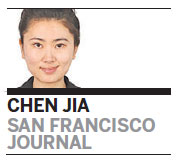 The constructive dialogue on developing clean energy technology with China has been gaining steam in California - the greenest state in the United States - ever since President Barack Obama and Chinese President Xi Jinping focused on practical issues like climate change.

The budding business and academic cooperation opportunities have continued to boom since California and China vowed to strengthen low-carbon development to fight climate change in September of 2013.

In one of the latest moves, UC Berkeley brought Silicon Valley-based academics, tech company entrepreneurs and venture capitals together for a panel discussion on clean energy technology.

"Solar and wind are both infrastructure type projects that are very often at the top of list, but we also want to bring in, from what I understanding, everything from energy efficiency and how we operate our plants and factories," Kevin Hsu, editor of Environment Future China Environmental News Alert, said on the China Forum panel held at Berkeley.

"We have noticed that the renewable energy growth in China is just amazing in capacity, but the future we have found for wind and solar energy are very limited," He Gang, a researcher on energy and climate policy at Lawrence Berkeley National Laboratory, said on Sunday.

How to match the suppliers of renewable resources and demand of energy is a big challenge for us, he said.

He's research is about how to optimize the availability and the change of renewable resources with the demand and at the same time optimize resources in China, he said.

Globalization is a big trend in China and many cities are starting to think of developing low carbon cities, he said.

But, "what is a low carbon city", "how they compare to each other", and "what are the available technologies" to help them, those are all the questions yet to be answered.

He also noted "if China wants an answer with energy, we have to deal with coal because 80 percent of China's electricity generated from coal".

"In order to change the infrastructure, nothing's going to happen overnight. Disposing of coal or commissioning oil and gas, that's not going to happen in the next five to 10 years," said Shen Han, a principal at Formation8, a venture capital firm.

He said China put $67 billion into clean tech research last year, while the US put in $44 billion.

"We did see huge growth in deployment in technology in China but coal remains cheap and it's a huge industry that is still providing 70 percent of China's energy," he said.

"If you look at the last three years' innovations in Silicon Valley, it all touches energy or resources. We have quite big cooperative potential between China and US in the clean tech space, and we saw many headlines about stories of start-ups and tons of money from venture capitalists," he said.

But, he also warned it's "pretty discouraging" when you evaluate how an innovation wins commercial success, which takes lots of steps and challenges.

"When we look at a new investment, we should not just let ourselves get mesmerized by how fancy the chemistry or molecules are but also keep in mind what it takes to take it to the next level of manufacturing," Shen said.