The announcement last Wednesday by CVS Caremark that it will stop selling tobacco at its more than 7,600 CVS/pharmacy stores across the United States by Oct 1 has been widely welcomed as a courageous decision to help people kick the habit.

The company estimated that the move will cost some $2 billion in revenue on an annual basis.

However, CVS Caremark President and CEO Larry Merlo said that ending the sale of cigarettes and tobacco products at CVS/pharmacy is the right thing for the company to do for its patients and customers and to help people on the path to better health.

"Put simply, the sale of tobacco products is inconsistent with our purpose," he said.

Merlo believes the significant action taken by his company will further distinguish itself in how it is serving its customers and health care providers and better position itself for continued growth in the evolving health care marketplace.

The decision, though regarded by some as a public relations gesture, was immediately praised by President Barack Obama.

"As one of the largest retailers and pharmacies in America, CVS Caremark sets a powerful example, and today's decision will help advance my administration's efforts to reduce tobacco-related deaths, cancer, and heart disease, as well as bring down health care costs - ultimately saving lives and protecting untold numbers of families from pain and heartbreak for years to come," said Obama, formerly a smoker.

Former New York City Mayor Michael Bloomberg, probably the fiercest fighter on tobacco, hailed the decision as a "major milestone in the effort to reduce tobacco use." 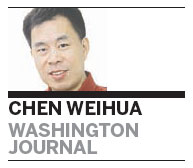 "It sets a new bar for all companies that market themselves as pharmacies and health care centers," said Bloomberg, who had introduced a tough smoking ban during his three terms as mayor.

"Just as no responsible doctor would put a cigarette machine in the office lobby, no responsible pharmacy should put cigarettes behind the counter. Pharmacies should help heal people, not make them sick," he said.

Bloomberg's words are clearly pointed at CVS Caremark's major competitors, mainly Walgreens and Rite Aid, which may pick up the tobacco business cut by CVS. Pressure is also clearly mounting on the rivals, at least from anti-smoking groups which have been criticizing drug chains' tobacco policies for a long time.

The CVS Caremark decision, which has been reported by the Chinese news media, is also likely to exert pressure on the world's most populous country, which boasts 350 million smokers and has been fighting an uphill battle in fulfilling its commitment to the World Health Organization's (WHO) Framework Convention on Tobacco Control, ratified by China in 2005.

Several moves taken by China in the past two months have also drawn global attention.

On Jan 7, the National Health and Family Planning Commission said it will try to put forward provisions this year on an indoor smoking-ban and push for the nation's legislature to regulate on the harms caused by tobacco.

China does not have a national law banning smoking and certain rules on forbidding smoking in public places have been either vague or not adequately enforced.

The health authority's announcement came just nine days after a notice issued jointly by the general offices of the Central Committee of the Communist Party of China and the State Council, urging leaders at various levels to set examples in banning smoking in public places such as schools, hospitals, stadiums, cultural facilities and public transport, as well as banning smoking at government activities.

According to the national health authorities, China is the world's largest tobacco producer and consumer. About 28.1 percent of people over 15 are smokers. Second-hand smoking threatens the health of 740 million non-smokers. Each year, 1 million Chinese die of smoking-related diseases.

The WHO predicted that total smoking-related deaths in China would increase to 3 million a year by 2050 if the smoking rate does not come down.

Just as 1.3 billion Chinese greeted the Year of the Horse on Jan 31, five health organizations in China, including the Chinese Center for Disease Control and Prevention and Chinese Association on Tobacco Control, pleaded for people not to send cigarettes as gifts during the festival. Offering cigarettes as gifts and at meetings and the dinner table has been a long tradition in China.

The tobacco industry has been a major source of income for both residents and governments in several provinces such as Yunnan, Guizhou and Hunan, making the fight to ban smoking even more difficult.

While many are waiting for China to show its teeth in its anti-smoking campaigns, the latest example set by CVS Caremark is likely to have a positive impact on a nation that the company has not yet set foot on.