For Qiao Ling, a Shanghainese who has lived in Washington for the past few months, one of her wishes is to find an authentic Chinese restaurant exactly like those in her hometown.

It's a feeling shared by an increasing number of Chinese who have either emigrated to the United States, come to work, study or just for a short visit. The stomach is the most "patriotic", as many would say.

But most Chinese restaurants in Washington, like in other US cities, are simply not authentic Chinese. They're Americanized despite some efforts to please the taste buds from China.

At Chalin's, a restaurant that serves largely Sichuan food on the Connecticut Avenue near Van Ness, waiters would show Chinese patrons a different menu with food they believe only Chinese would enjoy, especially in terms of the spicy level.

At the Sichuan Pavilion on K Street, Yi Dong, who was originally from Shanghai but has lived in the US for more than 20 years, was reminded by the head waiter that some of his orders were not Chinese, but American-Chinese, such as General Tso's chicken and beef with broccoli.

For Ling, the Chinese restaurants in the US are just not up to mainland standards. "It seems that one sauce has been used for all dishes," she said.

However, that doesn't seem to prevent Americans from patronizing those outlets in the tiny Chinatown in the US capital.

The Chinatown Express on the 6th Street near H Street has been receiving throngs of patrons every day. Its walls are filled with clippings of rave reviews by the Washington Post, the New York Times and the Washington Times.

Ling can see why the restaurant would draw such attention given the few competitors out there, but she is sure such an ordinary place would not get any review in her hometown of Shanghai.

Sometime it's not hard to find out why authentic Chinese food is not served. At P.F. Chang's, one of the largest Chinese restaurant chains in the US, kitchen staffs are often non-Chinese.

"It's a huge distortion of Chinese culinary culture," said Ling, who, when back in Shanghai, likes to frequent new restaurants.

Some Chinese and even some Americans who have lived in China for long have argued that a good way to help increase the mutual understanding between the two countries is to introduce more Chinese culinary culture into the US, given that most Americans don't have the chance to savor authentic Chinese dishes. 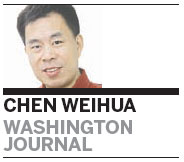 So besides attracting those Chinese STEM students - referring to those studying science, technology, engineering and mathematics - the US badly needs to attract more high-level Chinese chefs from China. "Otherwise Americans don't know what they're missing," said Ling, referring to the wide variety of Chinese food.

Ironically, Ling may not realize that some Americans living in China actually missed Chinese food, or the American Chinese food she has complained about.

In Shanghai, Fortune Cookie was probably the first restaurant in the city of 24 million people that served American Chinese food. Just as the name suggests, a fortune cookie is totally non-Chinese. The crisp cookie made from four, sugar, vanilla and sesame seed oil and containing a piece of paper with words of wisdom and prophecy is only found in Chinese restaurants in the US and several other countries, not in China.

Some of the ingredients used by the restaurant, such as Skippy peanut butter, Mott's applesauce and Philadelphia cream cheese, may never been found in the kitchens in other Chinese restaurants in town. Again, popular dishes, such as General Tso's chicken, beef broccoli and crab Rangoon, deep-fried wonton filled with Philadelphia cream cheese, spices and homemade sweet chili sauce, won't appear on the menu of other restaurants in China.

Ling disagrees that American Chinese food, like that served in the Fortune Cookie restaurant in Shanghai, or those in Washington's Chinatown, deserves the status of other Chinese cuisines, such as Sichuan, Hunan and Cantonese dishes.

"I just hope the US first lady Michelle Obama won't drop in one such restaurant during her visit in Beijing, Xi'an or Chengdu, otherwise she will miss the real Chinese food," said Ling.

Mrs Obama, who is leaving for China today with her two daughters, Malia and Sasha, and mother Marian Robinson, told children at Washington Yu Ying Public Chartered School early this month that she is an "adventurous eater".

Chicken feet, fish brain and pickled jellyfish were some of the Chinese dishes mentioned by the children, who have already visited China.