US and China strategies are anything but clearly defined

People reading and watching both the Chinese and US news media in the past years may easily tell how the analysts, pundits and officials in the two countries often bypass each other in talking about their nation's strategic intentions.

In China, the US rebalance, or pivot to Asia strategy, as President Barack Obama repeatedly stressed in his four-nation Asia tour last month, has been largely perceived as a containment policy to hold down China, such as through strengthening allies in the region both in the military and economic fronts.

The US, on the other hand, has described its strategy as a response to an increasingly assertive China that "threatens its neighbors", an accusation China has denied. Many Chinese believe that the US has tried to use such an excuse to regain its weakened clout in the region.

The Chinese anxiety caused by the US pivot to Asia may not come as a surprise. Even former US National Security Advisor Zbigniew Brzezinski said in January that the US has sent the wrong signals to the Chinese by some of the wording Obama used in Australia more than a year ago in which he used the term "pivot".

"He should have not used such a military term and associated it with military decisions," Brzezinski said. 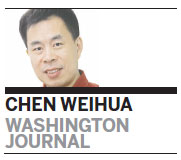 The same might be true of when General Herbert "Hawk" Carlisle, commander of the US Pacific Air Forces, spoke at the Center for Strategic and International Studies on Monday. Some of his words would sound both hawkish and bizarre in China.

"I will tell you what bothers me every day. The largest missile arsenals in the world are Russia, China and North Korea in that order. And most of them are pointed either at us or our friends or allies. So our ability to defend against potential missile attack is one that is hugely a challenge," Carlisle said.

Carlisle expressed concern that US and Chinese military forces have the opportunity to operate significantly more in close proximity with each other in the future.

"The opportunity for miscalculation is great," he said, adding that both should do a better job in managing such friction to avoid incident like the collision between the US Navy EP-3 reconnaisance plane and a Chinese People's Liberation Army Navy F-8 fighter in South China Sea in April 2001. That incident caused the crash of the Chinese jet and killed its pilot.

While mentioning the EP-3 incident, Carlisle did not address a long-standing Chinese concern about the continuing surveillance by US planes and vessels off China's coast. To the Chinese, such reconnaissance conducted by the US smacks of hostility. Many have reminded the US to imagine what it would think if Chinese military vessels started reconnaissance off the coast of Florida, California or New York.

Though China and the US have become ever more interdependent economically, talk about the potential for conflict has gained ground lately despite a consensus reached by the presidents of the two nations last year to build a new type of major country relationship to defy the historic rivalry between an existing power and a rising power.

In their latest book, Strategic Reassurance and Resolve, James Steinberg, the former deputy US secretary of state and now a professor at Syracuse University, and Michael O'Hanlon, a senior fellow at the Brookings Institution, have questioned the thinking that a future conflict is inevitable between an established power and a rising power. 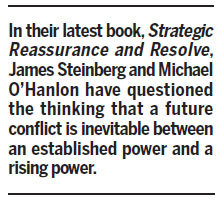 These people urge their leaders to prepare now for a future showdown.

Steinberg and O'Hanlon have also questioned the argument that the economic interdependence between the two countries and the many areas of shared interests will lead to more collaborative relations in the coming decades.

The two instead pointed to a less deterministic third way by arguing that powerful domestic and international factors, especially in the military and security realms, could well push the bilateral relationship toward an arms race and confrontation, even though both sides will be far worse off if such a future comes to pass.

Steinberg and O'Hanlon contend that such a pessimistic scenario can be confidently avoided only if the US and China adopt deliberate policies designed to address the security dilemma that besets the relationship between a rising and an established power.

In the book, the two give a list of recommendations that call for restraints on both sides in their military buildups.

Steinberg admitted on Monday in a talk at the Brookings that both countries are not convinced of each other's strategic intentions, such as when the US talks about its pivot as a measure to enhance stability and not to contain China or when China talks about its peaceful rise.