BEIJING / NEW YORK - President Hu Jintao starts his four-day visit on Tuesday to the United States that analysts are confident will reset a relationship that suffered setbacks last year.

His visit followed a massive publicity campaign by the Chinese government that began on Monday with a commercial publicizing China on TV programs.

Hu's visit includes stays in Washington and Chicago and is the first time that he has visited the US since US President Barack Obama took office two years ago. It will be their eighth meeting over the past two years, a frequency that some White House officials have described as "rare in modern US diplomacy".

The meeting will focus on the US' arm sales to Taiwan, trade, regional issues such as the Korean Peninsula, global economic governance and climate change.

Hu on Monday praised relations between the two nations, highlighting recent progress in ties and calling for both sides to "abandon the zero-sum Cold War mentality". 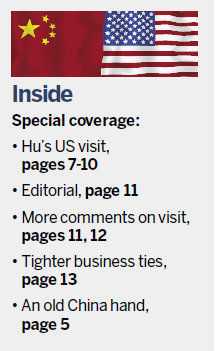 "We both stand to gain from a sound China-US relationship and (we) will lose from confrontation. We should view each other's development in an objective and sensible way," Hu said in an interview with the Wall Street Journal and the Washington Post.

He said that differences and sensitive issues remain.

Bilateral ties went through a rocky patch last year after the US' massive arms sale to Taiwan, Obama's meeting with the Dalai Lama and issues over trade.

During his visit, Hu is expected to meet students and businesspeople in Chicago, where Obama served as a community organizer, civil rights attorney and professor. He was the Illinois senator from 2005 to 2008.

According to the Associated Press, Hu will be honored in Washington with a lavish banquet at the White House as well as other festivities.

Purchases of Boeing aircraft and the building of a high-speed railway may be on the list of agreements, said the sources. Diplomats from both countries have been reportedly negotiating a formal joint statement, but it remains to be seen whether Hu and Obama will issue a statement about any deals during the visit.

Wang Fan, an international studies expert at the China Foreign Affairs University, said one reason for the attention on Hu's visit is that the US is now looking at China in the context of a shift in the balance of power as it figures out its policy on China.

Chinese analysts said the significance White House is attaching to the visit also derives from the fact that it increasingly needs Beijing's help in managing global issues, such as piracy off the African coast, Iran's nuclear program and reinvigorating the world economy.

The analysts added that China wants to take the opportunity to win trust and dispel suspicion in the US. The two are each other's second largest trading partner and China views the US market as crucial to its economic development.

Representative Rick Larsen, who is co-chair of the US-China Working Group, is thrilled about the expected meeting.

"It is a very exciting time right now to have this meeting between the leaders," he said, adding that the relationship has "picked back up quite a lot".

Just a day before Hu embarked on his state visit, a commercial sponsored by the Chinese government to promote China aired on CNN and BBC as well as on a giant jumbotron in New York City's Times Square.

It is being broadcast 15 times an hour and 20 hours a day for the next four weeks in a section between 46th and 47th streets of Times Square. It is also being screened in the Gallery Place in the Chinatown neighborhood in Washington, DC.

The commercial broadcast on CNN lasts 30 seconds and will be broadcast more than three dozen times from Jan 17 to Feb 13.

Zoe Cantales, a college student from Binghamton, New York, said the commercial is helpful for people to understand different places and different cultures.

Lane Luangxay, who was traveling through New York City with Cantales, said: "It's very cool and it shows how much China has progressed over the years".

The commercial is slated to be aired in Europe, Latin America, the Middle East and other parts of the world.

CNN and BBC will soon be airing a longer, 12-minute piece that discusses a wide range of subjects from politics, economy and society to scientific research, education and ethnic groups.

"It is a timely move to shorten the gap between the traditional impression of China among overseas audiences and a real contemporary China," says Yu Guoming, head of the Rhetoric Research Institution of Renmin University in Beijing.

Li Lianxing in Beijing and Tan Yingzi in Washington contributed to this story.