Mei Chou closed her first New York City restaurant in 2008 because of it. Now she is facing the same issue again with her two-year-old Chinatown bistro - skyrocketing rent.

"Rent is going to kill the culture and excitement of New York," said Chou, who is of Chinese decent. "For me, the rent is high because it is a small place. I end up paying just the rent and fees, and I don't have a penny left in my pocket."Chou opened her first Malaysian restaurant, Franklin Station Caf, in Tribeca in 1993. Then the monthly rent was $2,700. In June 2008 she was forced to close when the rent went to $25,000 a month.

Two years ago, Chou opened her second Malaysian restaurant, Aux Epices, in Chinatown. Now she said she is struggling to pay her $6,000 a month rent, plus additional fees to stay open.

Chou said she needs to make at least $1,000 in profit a day to stay in business, but she can only make that much for about 20 days in a month. She said that sometimes she has had to use her own savings to stay afloat.

"I don't think I would have opened up another restaurant if I hadn't gotten a good deal at this location," said Chou. "The restaurant was already renovated and it included the fixtures, so I didn't need to put money up front."

Like Chou, many small restaurant owners in New York struggle to pay the rent and make a profit. New immigrants and small business entrepreneurs in Chinatown are facing increasing rents that reduce the supply of affordable housing and commercial space, according to a 2013 report from the Asian American Legal Defense and Education Fund (AALDEF).

"Some of the mom and pop stores have been pushed out due to increasing rents," said Bethany Li, a staff attorney with the fund and author of the report. "As rent increases for residents in Chinatown, some commercial businesses find it harder to support their businesses because there are fewer residents and workers going into their stores."

Benjamin Fox, executive vice-president of Massey Knakal Realty Services, said that commercial real estate rents have been going up for the past 300 years in New York and Chinatown is no exception. "Neighborhoods change and rents go up," said Fox. "Rent has been going up for several years and in some instances maybe 50 percent."

Lui Aimei, who has owned the Double Dragon Chinese Food restaurant in the Bronx for five years, said that her rent has increased because of the pending $320 million Kingsbridge Armory ice center. The world's largest indoor ice rink is to be built across the street from the shopping center where her restaurant is located. 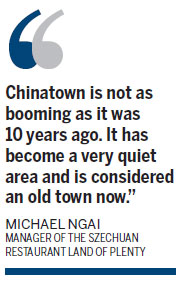 "A lot of people are complaining because the rent has risen," Mei said in an interview with China Daily. "If there is an ice rink that will be built nearby, then the rent will go up."

More than 10 small business owners near the planned ice center have received notices from their landlord that their rent has increased 75 percent to 100 percent, according to the New York Daily News.

Michael Ngai, manager of the Szechuan restaurant Land of Plenty in Midtown Manhattan, said that for restaurants to survive in New York they must have good food, good prices and a good location. He said his restaurant was doing well because of the quality of the food and low prices that compare to restaurants in Chinatown.

"All restaurants are facing rent problems, especially the ones in Chinatown," said Ngai, adding that his restaurant was fortunately not facing high rent. "Chinatown is not as booming as it was 10 years ago. It has become a very quiet area and is considered an old town now."

Higher rent is affecting a large number of restaurants throughout the city, said James Versocki, the attorney for the New York State Restaurant Association. "Traditional neighborhoods across the city have retail establishments that are looking to come in and they push out the restaurants that can't afford rent," he said. "Rent escalates on a regular basis and city taxes are also another factor. In some cases, I have seen taxes increase 150 percent."

Many businesses have a low starting rent and then it increases every year, said the owner of a popular Sichuan Chinese restaurant in Manhattan's Chelsea neighborhood, who said he is not having problems with his rent.

"City taxes are also a problem, sometimes they double," said the owner, who declined to give his name. "For this one Chinese restaurant that opened three years ago, it paid approximately $8,000 in taxes and now they pay about $28,000. Taxes and rent go up each year and it is a problem for many Chinese restaurants," he said.

China's FDI in US set for increase

A musical spoof of the Clinton years