The latest US arms sales to Taiwan have not only drawn sharp protests from the Chinese government but also criticism from experts on China-US relations.

US President Barack Obama signed the Naval Vessel Transfer Act on Thursday to pave the way for the US government to sell four used Perry-class guided missile frigates to Taiwan. It was Taiwan's first purchase of US-made military equipment in three years.

Chinese Foreign Ministry spokesman Qin Gang said on Friday that the Chinese government has lodged a formal protest to the US in Beijing and Washington, and that China reserves the right for further actions.

"The Taiwan question concerns China's core interest and remains the important and sensitive issue in China-US relations," Qin said. "The Chinese side is firmly opposed to the arms sales by the US to Taiwan. The position is steadfast, clear and consistent."

He said the US action was "brutally interfering in China's domestic affairs and undermines China's sovereignty and security interests".

"It goes against the trend of peaceful development of the cross-Straits relations," he said.

Qin urged the US to stop official interactions and military exchanges with Taiwan, stop selling arms to Taiwan and do more that is conducive to the overall interests of China-US relations and the peaceful development of cross-Straits relations.

Chinese Ministry of Defense spokesman also made a similar protest. Geng described the US action as going against the good momentum of current China-US military-to-military relations.

The two countries have witnessed growing military exchanges in the past years with high-level visits and joint exercises, including China participating for the first time in the US-led Rim of the Pacific (RIMPAC) naval exercise this summer.

China has long regarded US arms sales to Taiwan, the US' frequent close-in surveillance along China's coast and the US Congress laws restricting military exchanges with China as three major stumbling blocks for developing bilateral military-to-military ties.

The four frigates to be sold to Taiwan this time are the USS Taylor, USS Gary, USS Carr and USS Elrod, commissioned in 1984 and 1985.

Many Chinese have questioned why the US would make such a move at a time when cross-Straits relations are believed by many to be at their best in decades.

Zha Daojiong, professor at the School of International Studies of Peking University, told China Daily on Sunday that the announcement of the arms sales can cause many to wonder if the Obama administration is backpedaling in pursuing ties with China.

Zha said that while Beijing should not see the sales as unexpected, as Washington can refer to its "gradual phase out" clause in a 1982 bilateral agreement, the timing is not good only weeks after Obama had a productive visit to Beijing.

"Was it because Washington saw an opportunity to exploit a sense of uncertainty in cross-Straits ties after the loss of KMT in local elections in Taiwan?" Zha asked.

Zha said the move does "not bode well for those in the (Chinese) mainland that prefer to see Washington working with Beijing to enlarge areas of cooperation and minimize geostrategic suspicions."

Zhiqun Zhu, a professor of political science and international relations at Bucknell University, also said the timing of the announcement is "unfortunate and suspicious".

"With its landslide victory in Taiwan's municipal and local elections, the DPP (Democratic Progressive Party) is aiming to take full control of the government in the 2016 election. Is the US sending some message to the DPP or the timing is just a coincidence?" Zhu said to China Daily on Sunday. 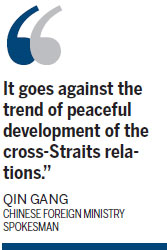