A proposed high-speed rail line in the western United States would be the first built in the US by a Chinese company.

With $100 million in seed money, developers plan to finance, build and operate the rail network with stations in Las Vegas; Victorville, California; and Palmdale, California, and service throughout Los Angeles.

"This is very good news for high-speed rail in the United States," said Andy Kunz, president of the US High Speed Rail Association. "Since the federal government has been dragging its feet on funding, it's nice that private interests have stepped up."

XpressWest, formerly known as DesertXpress, is a venture set up by Las Vegas-based hotel and casino developer Marnell Cos.

"Marnell has been involved with Chinese companies for years," noted Kunz. Construction of the 230-mile line could begin as soon as September 2016, according to XpressWest.

"As China's first high-speed railway project in the US, the project will be a landmark in overseas investment for the Chinese railway sector and serve as a model of international cooperation," said Yang Zhongmin, chairman of China Railway International, Co.

CRRC was formed after the merger of China North Railway (CNR) and China South Railway (CSR) to help the train companies become more competitive against rivals like Alstom of France, Bombardier of Canada and German-based Siemens.

Published cost estimates for the project have ranged from $5 billion to $12.7 billion. To this point, there has been no mention of public funding for the project. Although popular in Europe and Asia, high-speed rail has been slow to catch on in the US.

"I believe it could as these projects do make money once they are up and running," Kunz said when asked if the project could be built without public funding. "They require a huge upfront capital investment. In addition to fare revenue, there is tremendous potential in real estate opportunities around the train stations along the line." 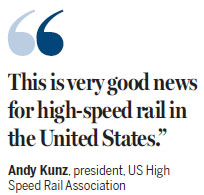 KroIicki said that the major obstacles to the project could be in California. "It could be expensive and time-consuming to obtain right-of-way rights for a rail line in Southern California," he said.

In May, Nevada established the Nevada High-Speed Rail Authority. The agency would select a firm to construct and operate a high-speed train from Las Vegas to California.

California is in the midst of developing a $68 billion high-speed railway, which CRRC also has expressed an interest in building. By 2029, the proposed rail system will run from San Francisco to Los Angeles, making the trip between the cities in under three hours, with plans to eventually extend to Sacramento and San Diego, totaling 800 miles with up to 24 stations.

With more than 10,000 miles of domestic high-speed track, the proposal is the latest step in China's efforts to export its high-speed train technology to the US and the rest of the world. Earlier this month, CRRC held ceremonies to begin construction on a plant in Springfield, Massachusetts, that will assemble 284 subway cars for Boston's metro system.

High-speed rail appears to be gaining traction in the US. In July, a private group called Texas Central Partners announced that it had raised $75 million in private funds to build a high-speed rail link between the Dallas and Houston, which are about 240 miles apart.