Anbang on Monday increased its offer for Starwood again, to $14 billion, topping the latest bid for Starwood from Marriott International Inc.

Monday's non-binding offer from the Anbang group, which includes private-equity companies J.C. Flowers Co and Primavera Capital Ltd, saw its all-cash purchase price for Starwood increase to about $82.75 a share. Last week Marriott increased the cash portion of its bid to $21 a share from $2, valuing its stock-and-cash offer at about $79.53 a share or $13.6 billion.

In a statement, Marriott said it was committed to completing its deal with Starwood but didn't increase its current offer.

"Starwood stockholders should give serious consideration to the question of whether the Anbang-led consortium will be able to close the proposed transaction, with a particular focus on the certainty of the consortium's financing and the timing of any required regulatory approvals," said Marriott.

A union between Starwood, operator of the Sheraton and Westin hotel chains, and Marriott would create the world's biggest hotel chain with more than 1 million rooms and 30 brands.

Companies like Anbang may be increasing investment in overseas assets like US businesses and real estate to counter the decline in economic growth in the mainland as the government transitions the Chinese economy away from a dependency on exports to one more focused on domestic consumption.

"I suspect with Anbang there is a sense of urgency to deploy money into US-based assets," analyst C. Patrick Scholes of SunTrust Robinson Humphrey Inc told China Daily.

Wes Golladay, an analyst with RBC Capital Markets, said: "Anbang wants to increase their investment in US real estate and assets to stabilize returns." 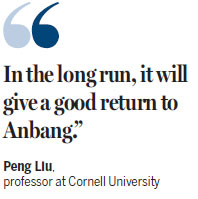 Peng Liu, professor of hotel administration at Cornell University, said the price is a bit high, but it is the sort of premium out-of-towners should pay. "In the long run, it will give a good return to Anbang," he said.

"First, the hotel industry is a perfect acquisition target for an insurer. Due to the fiduciary duty, an insurer like Anbang should not invest in high-risk projects. The market risk for the US hotel industry is moderate and even slightly lower than the market average. Acquiring Starwood would greatly improve Anbang's competitive position in the industry by acquiring brands (such) as Sheraton and Westin," said Jian Yang, a professor of finance at the University of Colorado in Denver.

"We do not think the latest offer is a slam dunk for Anbang to win as the offer is only $3 more per share than (Marriott's) counter offer. We suspect that many investors in (Starwood) like the idea of the opportunity a (Marriott-Starwood) combination presents. Additionally, as an all-cash offer, (Anbang's proposal) likely presents taxable gains," Scholes and SunTrust's Bradford Dalinka wrote in a research note.

Scholes and Dalinka also think that Marriott is unlikely to "significantly" increase its offer. RBC's Golladay agreed saying, "It's getting harder for Marriott to justify the deal price."

Cornell's Liu said it may be too costly or risky now for Marriott to outbid Anbang again.