The US and China face a positive common future, even though certain misunderstandings and distrust exist on both sides, said experts attending the annual conference of the Committee of 100 on Saturday in Beverley Hills, California.

The positive trends in the political arena were identified as more collective leadership in China being perceived and welcomed by the US, and the Chinese society becoming more empowered, said David M. Lampton, director of China Studies at the Johns Hopkins School of Advanced International Studies, in a panel discussion at the conference.

"Chinese society and politics have really changed in the last 35 years," he said. "People who say there has been no political reform and change in China, I don't know what China they're looking at."

In the economic area, the US is the beneficiary of the closer relationship.

"In the US, 90,000 Americans are working in Chinese-owned enterprises," he told the audience that included Chinese-American leaders from politics, business, entertainment and academia. "I was in Detroit not long ago, and Chinese investment in over 100 enterprises there is helping turn around the troubled city."

In addition, 324,000 Chinese students are enrolled in American educational institutions at all levels, which represents the equivalent of $8 billion a year in tuition and related spending, not to mention the intellectual value, he said.

Despite the fact that hundreds of thousands of Chinese students are in the US and 6,000 Americans go to China on average each day and $600 billion in goods are exchanged bilaterally each year, "we don't trust each other", Lampton said.

According to a recent opinion survey commissioned by the Committee of 100, Americans have mixed perceptions of China. On the one hand, they see cooperation between the two countries as necessary, and recognize the benefits of increased bilateral trade and investment. On the other hand, they are skeptical of China's economic and political intentions.

The survey found that 50 percent of the 1,000 respondents nationwide call China a potential economic threat and 55 percent see China as a military threat.

"The Chinese and Americans have favorable views towards each other's people, but not nations," said Clayton Dube, who heads the US-China Institute at the University of Southern California.

The source of distrust comes from negative news, such as the Chinese economy, pollution and human rights, and Americans overreact to these issues because their knowledge base is limited, said Dube. "We have the sense of big things going on and the big things don't tell the whole story."

The perception of more assertive leadership in China was also falling into "the cauldron of US domestic politics", said Lampton, adding that focus on the tightening aspect was not the direction the US was hoping to see.

There's greater suspicion among Americans towards China than on the Chinese side towards the US, said Dube, citing the findings of the survey which show that 50 percent of Americans think the purpose behind Chinese investment in the US was to increase Chinese influence here.

Two of the biggest construction projects in Los Angeles right now are funded by Chinese companies, employing hundreds upon hundreds of construction workers and later thousands upon thousands of people will live and work in those buildings, Dube said.

"This is not about buying influence. This is about seeing a good investment opportunity," he said. "And this is something many Americans do not yet understand."

Misunderstandings exist on the Chinese side, too. "Most Chinese think that America does not want China to rise, but this isn't true. The survey shows two in three Americans are happy to see China rise," he said. "If you work with General Motors, you have to be very happy, because they buy Buicks."

More and more young people on both sides are learning more and more about the other side and they start out with a much more positive attitude, which is a reason for optimism, he explained.

Addressing the conference, Congressman Ed Royce, chair of the US House Committee on Foreign Affairs, said, the fact that "we have more students in the US who want to study in China is key to the future of US-China relations." 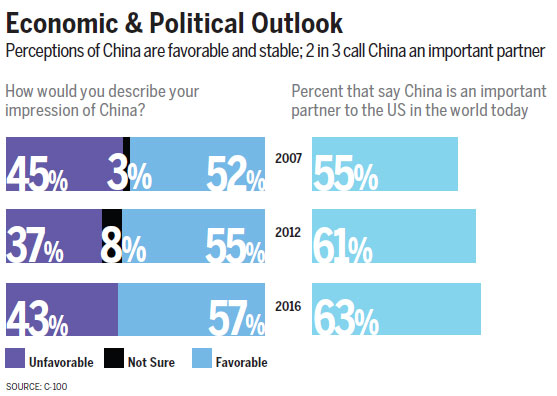