China had nearly $1.4 trillion in illegal financial outflows from 2004-2013 for the largest amount of any developing nation, according to a watchdog group.

Washington-based Global Financial Integrity (GFI) on Thursday issued the sixth update to its reports on illegal outflows that began in 2008. GFI defines illicit financial outflows as " funds that are illegal in their generation or use," GFI economist Joseph Spanjers said.

Illicit financial outflows have been accelerating in developing nations. Illegal outflows are considered a serious problem because they can deprive the government of tax money that could be used to fund schools, healthcare and programs to eradicate poverty.

GFI, a research firm, used government statistics reported to the International Monetary Fund and then applied the data using its methodology to come up with the estimates.

Spanjers said the overwhelming majority of China's illicit outflows or about $1.1 trillion from 2004-2013, comes from the fraudulent invoicing of trade deals. This occurs when the value of a trade transaction is either under- or over-reported.

Yongxiang Wang, a professor at the Marshall School of Business at the University of Southern California in Los Angeles, said that the inappropriate invoicing may involve " fraudulent export tax rebates and import tax avoidance that is mentioned in the GFI report".

China is at the top of the GFI report, followed by Russia with $1.05 trillion in outflows and Mexico with about $529 billion from 2004-2013. China has been in the top spot in the last three updates, Spanjers said.

He noted that illegal outflows amounted to about 2.7 percent of China's gross domestic product over the 10-year period. "For other developing nations, the total is closer to 4 percent of GDP.," Spanjers said.

Spanjers said GFI would encourage China and other developing nations to require a public registry of beneficial ownership " to make it easier for government officials and journalists to determine who owns a company. This has started to take off in Europe," he said.

Spanjers also said governments should require multinationals to disclose how much profit they earn in each country. 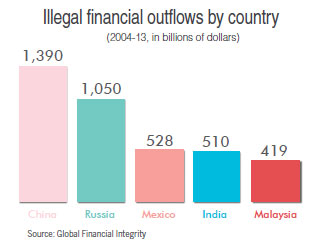