My Child, the Olympian 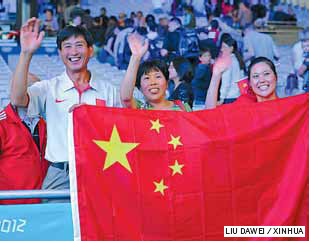 The most important cheerleaders for some of the Chinese Olympic athletes are their parents, and as Chen Xiangfeng reports from London, they are also the voices that tell the stories behind the pain and glory.

The world's best badminton player was on the court demolishing his opponent, and among the voices in the cheering crowd that Lin Dan heard, there was one that must have stood out - that of his mother, Gao Xiuyu. For her, the night her son won Olympic gold was one of the proudest moments of her life.

In the packed Wembley stadium at the London Summer Olympics, the top Chinese shuttler battled Malaysian challenger Lee Chong Wei to defend his crown in one of the most well fought matches in the badminton competition. And Lin Dan's mother was watching every move, together with her husband Lin Jianbin, and daughter-in-law Xie Xingfang.

"It felt so great," the proud mother says. It was the first time she and her family had watched Lin Dan in competition, although the shuttler is a veteran of three Olympics. Gao had not been there before, not even during the Beijing Olympics in 2008 held on home ground.

"I have never watched his games on the spot. Frankly, I never dared to do that," Gao says.

The reason she made the trip this time was because she was invited by a Chinese media corporation, which also sponsored family members of some other China Olympic athletes.

There are reportedly more than 2,000 journalists from China covering the London Games and competition is intense. One strategy to get an exclusive has been to get the inside stories from those closest to the Olympians - their family.

"When all focus is on the athletes and their individual stories, we found that fans are very interested in knowing more about the competitors' families, and how their parents have contributed to their success," says Wang Yongzhi, who is in charge of the Olympic program from qq.com, one of China's leading web portals.

"We started a special program called 'Home of the Olympian's Moms', and we invited the parents of some celebrity athletes to London so they can share their stories and feelings online."

It has been a program that has been enthusiastically endorsed by Chinese web-users, and the stories have enjoyed high ratings.

"I watched all of them," says Liu Na, a student from Hangzhou, Zhejiang province.

"It's emotional and moving, and you hear interesting stories that you never heard before.

"In China, many athletes come from families that are not rich, and it's a wonderful idea to reward them with a trip to London so they can watch and support their children."

Olympic sponsors are also behind this campaign of parent cheerleaders.

Proctor & Gamble, a worldwide partner of the International Olympic Committee, launched the 'Thank You Mom' campaign during the London Games, sponsoring parents of Chinese Olympians to travel to London during the Olympics.

"We believe that behind every athlete is an even more amazing mom," says Marc Pritchard, P&G Global Marketing and Brand Building Officer.

"P&G is in the business of helping moms. Through our 'Thank You Mom' program, we will support not just the moms of Olympic athletes, but every mom who does whatever it takes to make her child's life the best it can be."

Wang from qq.com echoes the sentiment that the program promotes a win-win situation for everyone.

"We not only meet the requirements of our viewers and Internet users, but we also provide a rare chance for Olympic champions to meet their parents right after winning the gold medals," Wang says.

Being able to support their children at ringside is becoming a more accessible trend for the parents of Chinese Olympians.

Many are coming to London, with or without sponsorship. This reverses a previous attitude among trainers and athletes that their presence may be a distraction.

"At that time, we were told to fully concentrate on training and competition. I was afraid to have my parents come to see me play. I did not want them to come even in domestic matches," Lin Dan says, explaining why his parents did not come to see him four years ago in Beijing.

But now, he is confident that having his family around is the biggest morale booster for him.

"I could feel the support from the family on the court. My wife, my mother and my father together in London made me more relaxed and energetic," says Lin. His wife Xie Xingfang was a teammate and former world champion.

"I should thank the media and the sponsors. They took good care of my parents. It was a special feeling."

For gymnast Chen Yibing, it was a comfort to know his parents were there for him, especially since he narrowly missed the gold in the rings in what could be one of the most controversial results in the Olympics.

"When I walked down and saw the score, my mind was blank for a moment. But when I turned around to see my parents, I told myself it's enough and it's all worth it," says Chen. His near flawless performance failed to outscore Brazilian Arthur Nabarrete, who finished with a stumble.

For the parents, their unfailing support can be depended upon in both low moments and high.

Sun Quanhong and Yang Ming was with their son Sun Yang throughout the pre-Games training camp at Bath, and when he stepped onto the winner's pedestal after winning two swimming golds in the men's 400m and 1,500m in London.

Sun Yang's success made them celebrities in London and household names back home as Chinese broadcasters turned the limelight on them during Sun's golden performances.

"All I want to do now is to cook a big bowl of wonton for my son," says Yang Ming just before she accompanied Sun Yang home. "That is his favorite."

Japan harms ties 'for own interests'

306 killed in twin quakes in Iran