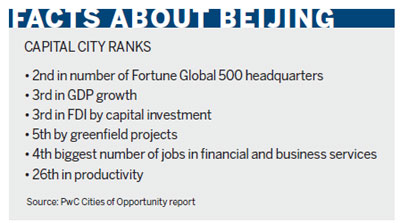 Beijing wields more economic influence than other large cities, even more than Paris, London and New York, suggests a report.

Even so, the Chinese capital still lags behind comparable cities when gauged by its innovation, infrastructure and business conditions, according to the report published on Thursday by the accounting firm PricewaterhouseCoopers International Ltd.

In terms of economic clout, Beijing moved to the top this year from the ninth position in last year's ranking, said the report, which is entitled Cities of Opportunity.

The capital's impressive performance results from the large number of headquarters of Fortune Global 500 companies it contains, the number of people who are employed in financial and business services there, the rate of foreign investment in the city and its GDP growth.

At the same time, the city performed poorly - coming in second to last in the ranking - in terms of its productivity.

"It has nowhere to go but up given that China has been focused on increasing productivity for many years," the report said.

"Besides ranking first in economic clout, Beijing also ranked high when gauged by the ease of travel between its airport and city center and the number of international conferences it plays host to, making its transformation into a 'world city'," said David Wu, PwC China public policy and regulatory affairs leader and PwC China Beijing office lead partner.

"Beijing has turned into a modern city with a developed service economy," he said. "It is home to the largest proportion of the country's service industry and has satisfying social efficiency. It has also maintained a low rate of unemployment.

"At the same time, it is a leader in the country in spending on education, which also establishes the conditions for the development of the service economy ... it's an example for other Chinese cities."

Shanghai also moved up in the ranking of economic clout, going from eighth place last year to fifth this year. That put it just behind London and New York, which tied for third place.

Shanghai also appeared at the top of the ranking in terms of capital investment and greenfield projects.

The ranking of cities' economic clout was one of 10 indicators used in a more comprehensive ranking to gauge the economic and social strengths of 27 cities in the world.

New York, London and Toronto occupied the top three spots on the broader list, with Beijing coming in 17th and Shanghai coming in 19th. The two are the only cities in the Chinese mainland to appear on it.

Beijing and Shanghai lagged behind in intellectual capital and innovation, transport and infrastructure, health, safety and security, and natural environments, as well as the ease of doing business.

The report said Shanghai and Beijing should strive to show balanced progress in a wide range of their social and economic indicators to ensure their economic growth will become as sustainable as other large cities.

"Cities succeed when they invest in core needs important to both people and businesses," said Bob Moritz, PwC US chairman and senior partner.

"When a city invests continuously and aggressively in critical areas, including education, healthcare, safety and infrastructure, it creates a healthy urban environment. Entrepreneurs and businesses thrive. The city economy grows. And long-term resiliency follows."

"Shanghai's economic strength and global appeal are the starting point for its transformation into a world hub for talent and innovation," said Nora Wu, PwC China Shanghai office lead partner.

"We expect that Shanghai will be an even richer urban center in 2025 than it is today, not just in the goods we produce but the services we offer, the culture we generate and the quality of the people who are drawn to live in and build this great world city."

Death from meningitis outbreak rises to 14 in US

China slams US on human rights

Trade growth target 'will be missed'