When the National Committee on United States-China Relations was set up 46 years ago to encourage mutual understanding and cooperation, the two big nations hadn't yet established diplomatic ties.

In 1966, 17 years after its founding, the People's Republic of China was still commonly referred to in the US as "Red China", while Chinese denounced "American imperialists".

But a group of visionary, passionate people, including the current NCUSCR vice-president, Jan Berris, bucked prevailing sentiments and committed themselves to helping write a new chapter in the US-China relationship.

Against the backdrop of "ping-pong diplomacy" in 1971, the just-formed NCUSCR helped break the bilateral logjam.

Steve Orlins, its president, reflected on the history of the committee and the bilateral bond it helped formalize just a year later, in 1972. The mutual challenges facing China and the United States today, while different and more complex, are no less daunting than those that accompanied the advent of diplomatic relations 40 years ago.

"At the gala one year ago, I read a headline from that morning's Wall Street Journal. It said, 'One Loser in Presidential Polling: China'. Twelve months later, as we prepare for the election (in November), the story remains unchanged," Orlins said Monday night at the annual NCUSCR gala, at New York's Plaza Hotel. 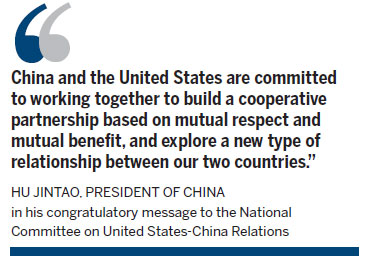 "This morning's headlines remind us how much work must be done on both sides. 'Distrust,' 'downturn', 'cheater' and 'thief' are some terms that have come to dominate our political discussion about China," Orlins said.

He appeared to be referring to China-bashing rhetoric in the US presidential race and a House of Representatives Intelligence Committee report released Monday on the national-security threat posed by Chinese telecommunications giants Huawei Technologies Co and ZTE Corp.

Those epithets have been seized on by those who mischaracterize the US-Chinese relationship and the countries' shared interests, suggesting that confrontation should supplant efforts at cooperation. Orlins, however, said he rejected such efforts.

"I know by showing your support for this organization and its mission, you don't either," he told an audience of 500, including many longtime advocates of a strong relationship between China and the US.

Orlins believes the US presidential election and China's 18th Party Congress, which will take place only two days apart in early November, will present the leaders of each country a unique opportunity to reset the bilateral relationship, by focusing on solutions rather than the legacy of 20th-century conflict.

"We must ask our leaders to abandon the campaign rhetoric and focus instead on the future of shared prosperity and cooperation," said Orlins, the NCUSCR president since 2005.

He told the fable of the Frog in the Well, written by Chinese philosopher Zhuang Zi over 2,000 years ago: The frog believes his home at the bottom of a well is paradise. Seeing only a patch of blue sky, he isn't aware of the wider world outside.

"If he surfaced, he would have an entirely different view," said Orlins. "Our job at the National Committee for the last 46 years is really quite simple. Our mission is to get us to the top of the well, so we can see the entire sky, so the people on both sides of the Pacific can realize the potential in the US-China relations," he said. 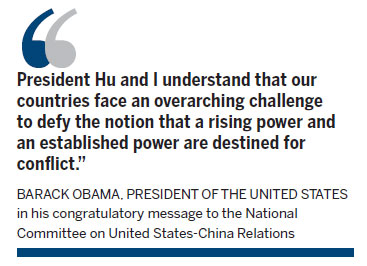 "The most powerful tool we have is education and educate we must," he said.

Monday's gala raised more than $1.4 million for the NCUSCR and will enable the committee to operate its dozens of programs. In past years, it has conducted briefings for members of Congress and senior US military officers, organized trips to China for US lawmakers and their staffs for discussions with Chinese counterparts on strategic security issues, and facilitated exchanges of student leaders and teachers.

On Oct 29, US Ambassador to China Gary Locke will speak at the sixth annual China Town Hall meetings organized by the NCUSCR. The event, which will be streamed on the Internet, will be followed by local presentations from on-site experts on China in 60 venues across the US, addressing topics within the bilateral relationship that are of particular interest to those communities.

Carla Hills, NCUSCR chairwoman and a former US trade representative, stressed the importance of diplomatic ties but also reminded Monday's gala audience about the challenges before the US and China.

"Our efforts have never been more needed. By broadening and deepening our relationship, we are more likely to find solutions to the tough issues we face," she said.

Hills read aloud a letter from US President Barack Obama before Zhang Yesui, China's ambassador in Washington, read one from Chinese President Hu Jintao. In their letters, the leaders praised the work of the NCUSCR and emphasized the importance of and their commitment to the relationship.

"China and the United States are committed to working together to build a cooperative partnership based on mutual respect and mutual benefit, and explore a new type of relationship between our two countries," the president added.

Hu noted that China and the US are presented with important mutual opportunities as well as challenges, and he expressed hope that the NCUSCR would build upon its past successes and make new contributions to the countries' relationship.

Obama, in his letter read by Hills, said that since President Richard Nixon's historic visit to China in 1972, ties have developed in ways leaders of that time couldn't have imagined.

"We now have an extraordinary range of issues on which we work together through our regular consultations and our Strategic and Economic Dialogue," Obama wrote.

"President Hu and I understand that our countries face an overarching challenge to defy the notion that a rising power and an established power are destined for conflict. Organizations like the National Committee are essential in helping us to meet this challenge by working to increase understanding between American and Chinese citizens at all levels of society."

Indra Nooyi and Inge Thulin, CEOs of, respectively, PepsiCo Inc and 3M Co, were honored at Monday's gala for contributions to the NCUSCR and US-China relations.

Death from meningitis outbreak rises to 14 in US

China slams US on human rights

Trade growth target 'will be missed'