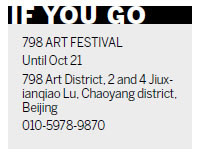 Having established itself in just five years as the most comprehensive and lengthiest event of the 798 Art Zone - thanks to a large number of participating artists, galleries and art centers - the annual 798 Art Festival is turning to play an educational role by increasing interaction between international and local artists and their audiences.

This year's art festival, running until Oct 21 at the 300,000-square-meter zone, features nearly 100 exhibitions and activities, from movie screenings to outdoor concerts and workshops.

Two key exhibitions feature sculptures shown in the art zone, while another presents a retrospective of poster shows. Both aim to tell the 10-year history of 798 and how it has forged closer bonds among artists and art enthusiasts.

According to Qi Wanji from the administrative committee of the 798 Art Zone, the festival has never been organized and presented at such a high level as this year's event.

"We've mapped out events to tell people of the past, present and future of the iconic art center of the country," she says.

Zhu Qi, an art critic, says this year's 798 Art Festival is also a "crucial aspect of what we do as artists".

"Paintings were put upside down. Installations were stolen. Some works were considered too pornographic to be exhibited," recalls Zhu, who is the curator of the ongoing Poster Exhibition of 798's 10-Year History, held at 798 Space gallery inside the zone.

To tell the history of exhibitions since 2003, Zhu chose more than 100 exhibition posters, which he regards as "valuable and iconic".

"Many audiences came to 798 art district after the 2008 Beijing Olympic Games.

"Some came even later. We want to show them what kind of exhibitions were held in the early days of 798 art district," he says. "After the curiosity of arts, people might start to wonder 'how and why 798 art district was born and what it has and will bring to us'."

Zhu tried to collect all the relevant exhibition posters, which have witnessed the development of 798 art district. But some galleries either moved out or just closed down and so some could not be found.

"Personally, I like the artworks exhibited at 798 around 2006 and 2007, which were avant-garde and experimental," Zhu says. "Artists were much more for art's sake compared to today. Some artists' works are now too commercial and lacking in thought."

Around 2000, as he recalls, some artists, galleries and book stores moved into the area, which was formerly known as Factory 798.

The newcomers included not only Chinese but also people from Japan, Germany, the United States and Italy. Artists lived and worked inside their studios, which were renovated from high-ceilinged factory houses. In 2005, the 798 Art Zone began to take shape.

"It was an unforgettable and special feeling to do create against the roaring machines and giant factory pipes," Zhu recalls.

Philip Tinari, director of the Ullens Center for Contemporary Art, remembers visiting 798 in 2002 for the first time with artist Sui Jianguo and a curator.

"Now Sui's 'red dinosaurs', exhibited in 2002 for the first time, has become the signature of the UCCA," he says.

As the reputation of the district soared and prices for contemporary Chinese art flew higher, some galleries were forced to move out due to rising rentals, which increased tenfold.

Meanwhile, cafes, restaurants, boutiques, media companies and even a hotel moved in.

Renowned artist Liu Xiaodong once said that "the almost deserted land has turned to be a land of gold. As a result, some artists have been forced out of the place.

"A good balance between art and commerce is vital. Otherwise, 798 Art Zone could be degraded to be a second-rate Wangfujing commercial street."

To promote that growth and balance, the administrative committee invited artist Guo Xiaoyan to curate the sculpture exhibition in the district's public space.

Previously, the scattered installations in the area had been put in by galleries or restaurants, Guo says, and some of them are "artless".

"For the ongoing exhibition, we gathered 21 Chinese artists to design and choose their sculptures specially for the public space of 798 art district," the curator says. "The sculptures usually aim at catching attention but this time we want the audiences to have a connection with the sculptures."

Sculptor and conceptual artist Zhan Wang has his stainless steel rock sculptures standing on a roadside.

Those passing by are curious about the artwork and take pictures with it, while some read the notes beside each sculpture to get to know the artist's statement.

"Sculptures are not made for consumption and entertainment, but to inspire and to evoke thinking," says the artist. "It's important to have the public involved."

"798 art district was a test lab for artists but now it serves more as a platform to introduce contemporary art world to Chinese audiences.

"It's hard to imagine a city like Beijing without a red-hot art center of Chinese art like 798. I think that those art-hungry tourists have an idea about art and now they need to know what good art is," he says.