The consuming challenge of food safety

Food safety is a top concern for Chinese shoppers, especially regarding such produce as vegetables, meat, seafood, grain, cooking oils and dairy goods, according to a report from Ipsos.

It shows Chinese people are very concerned about the quality of what they eat, especially those who are older (aged 31 to 50) and those who earn a higher monthly salary (12,000 yuan a year and above - more than $1,900).

Most people are highly aware of various channels through which they can obtain information on food safety, especially with incidents regarding clenbuterol in meat (showing awareness rates as high as 94 percent), melamine in baby milk formulas (92 percent), swill-cooked "gutter" oil (85 percent) and tainted steamed buns (80 percent).

Public concern about food safety results in food experts and third-party institutes being listened to in greater numbers and in more detail.

As a result, the Ipsos report shows that shoppers' trust in experts and authorities has reached 83 percent. A total of 89 percent of the respondents have shown an interest in participating in science activities organized by such experts.

However, people do not always form an accurate picture. When there is negative news about one brand, trust in all brands in that or similar sectors tends to be affected. As many as 70 percent of the respondents said they would doubt not only the brand in question but also similar brands when news of a safety issue emerges.

"Food safety incidents that have occurred in China attracted a lot of attention but the general public still has a very limited knowledge base on the issue. In the United States and European countries, there have been fully fledged food manufacturing practice and response measures toward safety issues," said Jennifer Tsai, managing director of Innovation and Forecasting at Ipsos Marketing in Greater China.

"Therefore, the consumers in those countries are less likely to become over-panicked and form serious doubts about all brands."

Tsai added that an independent third-party body should be set up to provide information about manufacturers' processes in raw material selection, production and distribution. The government should also have a role to play in this. However, this might require several years and the public still needs to learn more about food safety.

At least 62 percent of the respondents said they would change their buying habits when such incidents occur with more than 70 percent considering no longer purchasing the brand involved in the incident.

At the same time, the Ipsos report shows that more than 60 percent of people would choose foreign brands more often. The findings show the Chinese demonstrate a low level of confidence in domestic food companies. They also indicate domestic food companies have done too little in publishing and sharing food safety information.

More than 80 percent of the Chinese shoppers interviewed by Ipsos said they were eager to see the publication of food testing results, plus more transparency in this regard, besides the normal measures taken by competent bodies. More than 70 percent of the public hoped that random inspections will be conducted and test results published.

"Customers worry about raw materials and processing because such processes are not transparent. To make them feel assured you have to have standardized specifications and practices in every link of the production process," said Tsai.

"Food companies have a broad range of measures that can be taken to inform customers, such as clearer logos, product composition and information regarding possible allergies. If possible, such companies could allow visits to be made by members of the public to their plants and post videos online for the public to watch. At present, the transparency issue for domestic companies is still poor."

Food companies should pay more attention to ordinary people's insights, listen to their voices, value the opinions of experts and authorities, have differentiated strategies for feedback via various media channels, do a good public relations job, standardize practices and disclose information in a timely fashion and face the public honestly, said Kevin Zhou, vice-president of Ipsos in Greater China.

"Although all the work is about preventive measures, the businesses should give the public an explanation instead of hiding and walking away when faced with a food safety incident," Zhou said.

The survey was conducted with CBN Group and CBN Research Institute. The research focused on shoppers aged 18 to 50 and was categorized in three industries (food & beverage manufacturing, catering enterprises and food retail chain stores) and through surveys conducted in Shanghai, Beijing, Guangzhou, Chengdu, Shenyang, Xi'an and Wuhan. Qualitative and quantitative analytic methods were applied to measure people's focus on food safety and how the food safety issues in turn affected the behavior and attitudes of customers. 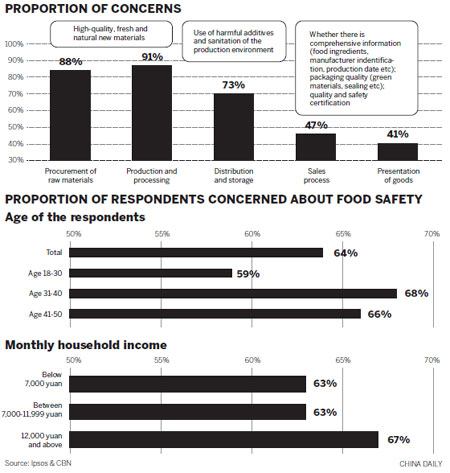