BEIJING - Kweichow Moutai Co Ltd, China's biggest liquor maker by market value, disclosed it has plans to double output and realize annual sales of 50 billion yuan ($7.6 billion) by 2020, with the help of a continuous price surge.

As the representative of China's high-end liquor brands, Moutai's price has nearly doubled over the past year, from less than 700 yuan for a bottle of Moutai Feitian in the beginning of 2010, to more than its current retail price of 1,300 yuan.

On Dec 20, Moutai released its maximum retail price restriction for dealers, which required Moutai Feitian to be sold below 959 yuan a bottle.

However, with the Spring Festival approaching, the demand for high-end liquor, such as Moutai and Wuliangye, has jumped. Although the price restriction came into effect on Jan 1, it has already been proven useless in the markets.

"Our lowest price is 1,280 yuan a bottle, and purchasing decisions must be made quickly because we don't have sufficient inventory to meet demand," said a salesman at Moutai's franchised store in Beijing. With the Spring Festival approaching, Moutai Feitian inventories are rapidly diminishing throughout Beijing. The store said that supplies are in such shortage, that they cannot sell the liquor by case (12 bottles), but only by single bottles. Although the franchised store price is far higher than the 959-yuan restriction, the salesman said it is still cheaper than at most supermarkets. 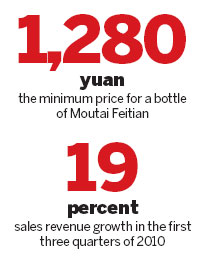 "We believe the price of Moutai will maintain a 15 percent growth rate over the next three to five years for its entire product line," said Zhao Jun, an analyst from Xiangcai Securities. "However, we worry about long-term sales, since a 50,000 ton output is almost 2.5 times the current output."

To guarantee sustainable sales, Kweichow Moutai is expanding abroad. During the past year, 586 tons of Moutai has been sold abroad, up 55 percent year-on-year, providing $50 million in sales revenue for the company, Yuan said.

In the first three quarters of 2010, Kweichow Moutai group produced 26,284 tons of liquor under various Moutai brands, up 14.26 percent year-on-year, resulting in sales revenue of 12 billion yuan, up 19 percent from the previous year.

In China, the market size for liquor is getting bigger and becoming more attractive as an investment. Data from the National Bureau of Statistics shows that the country's liquor market racks up annual sales of approximately $27 billion while consumption of bottled liquor has risen by 20 percent each year over the past five years.