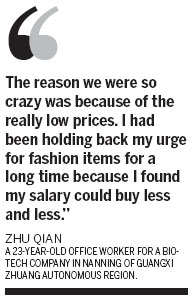 BEIJING - It was the moment of truth for Chinese e-shoppers on Dec 21, grabbing up discount items at China's largest e-commerce site Taobao.com since the site launched its shopping carnival with the biggest promotions of 2010.

In contrast to the choruses of complaints about rising prices heard at regular storefronts, there was enthusiasm everywhere, not least among the online retailers, who rang up a very Merry Christmas.

Starting at midnight Dec 21, about 750 million items went on sale for cut-rate prices, seducing e-shoppers to grab their credit cards out of their wallets.

Nocturnal online vendors across China sought to cash in on the frenzy, while e-shoppers dreamt of buying the products of their dreams.

Zhu Qian, a 23-year-old office worker for a bio-tech company in Nanning, the Guangxi Zhuang autonomous region, had been waiting in front of her computer screen for hours for a chance to buy a 1,500 yuan ($227) coat on sale at 90 percent off during the shopping spree. Her boyfriend struggled with another laptop to help Zhu snag the prize.

"The reason we were so crazy was because of the really low prices," Zhu said. "I had been holding back my urge for fashion items for a long time because I found my salary could buy less and less."

For 22-year-old Song Tingting in Beijing, the spree was less happy. "I went to bathroom for a few minutes, and in that time, 300 fur skirts were sold. Not one was left for me."

She said: "When I woke up at 3:00 am for the half-priced gold bars, 20 bars were snatched up in less than three seconds, before I had time to even click my mouse."

But lucky or not, millions of online shoppers like Zhu and Song flocked to Taobao, eager to part with their money.

In the first minute, 10,000 sales were made on the site, and 1,500 Christmas-theme nightdresses sold out. Within five minutes, the luggage and bag store Kelehui sold 705 pieces of luggage. In ten minutes, the fashion boutique Pink Large Dolls had a 1 million yuan turnover.

A Taobao official said: "Since 10 am, the hourly turnover hit 100 million yuan, a record in China's online retail history."

By 2 pm, 17 e-stores had more than 10 million yuan in sales and six others had 5 million yuan, the official said.

Cao Qing, of Qigege Boutique, said: "It was really exciting when all of the staff were staring at the screens and clicking away."

Not only small items, but big deals, too. A 168,880 yuan pearl necklace was sold by Urban Princess, a popular online jewelry store.

The Taobao official said that consumer groups have expanded and diversified, further adding to the red-hot activity round the sale.

Wang Shao, a 25-year-old news magazine editor in Wenzhou, Zhejiang province, spent almost 90 percent of her salary at Taobao. "Some brands, like ZARA and H&M, haven't officially launched in Wenzhou, so I have to buy them online through agents, who charge me 30 yuan for each piece," Wang said.

"It is still worthwhile," she added.

Fashion-savvy Chinese consumers were out in force throughout the spree, buying up trendy items that had stolen their hearts.

Replicas of the engagement ring Prince William gave Kate Middleton, priced at 20 yuan to 10,000 yuan, were among the most-viewed items.

American skin and lip care brand Evolution of Smooth has also stirred a craze on the Chinese market without officially launching here.

Good-looking playboy Chuck Bass, of the hit TV series Gossip Girl, was using Smooth Sphere lip balm to lure many a Chinese girl into buying on Taobao. At least 3,000 of the lip balms were sold within 12 hours.

Yang Xueshan, vice-minister of industry and information technology, predicted that the transaction volume of China's e-commerce is expected to surpass 4 trillion yuan in 2010, as online shopping would reach 400 billion yuan.