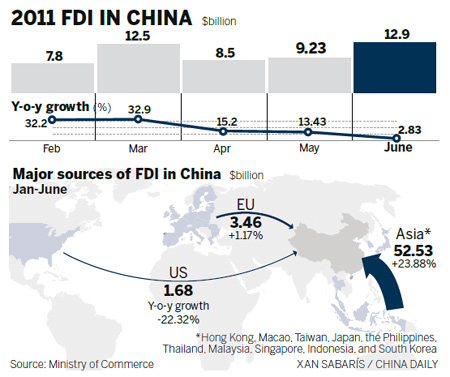 BEIJING / NEW YORK - Growth of foreign direct investment (FDI) in China slowed in June due largely to decreased investment from the United States and waning growth from the European Union.

Statistics from the Ministry of Commerce showed the FDI in China increased only 2.83 percent in June to $12.9 billion, registering the slowest rate since last September and a sharp decline from the 13.43 percent increase in May.

However, overall FDI in China continued to rise 18.4 percent in the first half of the year to reach a total of $60.89 billion.

Zhang Qizuo, an economist from Chengdu University in Southwest China's Sichuan province, believes the huge US debt (now up to $14.3 trillion), stagnant economy and imbalanced economic structure would explain why its FDI in China has fallen.

"Under such circumstances, both private US companies and governments in different levels are not capable of investing significantly in China. Somehow they are looking for the investment from China to help them boost their own economies and low-employment rate," said Zhang, who specializes in FDI studies for more than 20 years.

He also pointed out that the appreciation of the yuan and China's rising labor costs would put an end to US outsourcing its manufacturing business in China.

Ministry spokesman Yao Jian said on Friday that China will remain a major destination for global FDI in the mid and long term and there is no sign of a significant drop coming.

"The general picture is China's FDI growth has been fluctuating for several months, but overall China's (favorable) environment of attracting FDI has remained unchanged," Yao said at the monthly news conference.

As the cost of labor keeps rising and the nation adjusts its FDI policy, FDI growth has been on a decline from 32.9 percent in March.

Yao said the decline won't develop into a trend, and he predicted that FDI in China would continue to grow this year and could exceed last year's $105.7 billion.

"China's market consumption is very large, and the labor cost advantage could be maintained for a certain period even though labor costs have been climbing."

Yao cited the monthly fluctuation to the influence of some large projects and believes there is no need to panic over the slower growth of FDI from the US and EU.

"There is no need for worry, given that US outbound investment in emerging markets, including Brazil and India, decreased sharply in the first quarter," he said.

Investment from the EU, a major contributor to China's FDI, is also slowing. From January to June, it grew a mere 1.17 percent to $3.46 billion. In comparison, the FDI from the EU picked up 9.02 percent to $2.93 billion during the first five months.

In 2010, the EU's overseas investment dropped 62 percent compared with the previous year. "It's normal and understandable that the growth of the EU's investment in China has slowed," Yao said.

"Monthly FDI figures cannot be taken as an indication of a trend. What matters are the underlying economic factors - in particular the economic growth. And these remain strong in China. So I expect the data for June to be just a blip in an otherwise excellence performance of China in terms of attracting FDI," said Karl Sauvant, executive director of Vale Columbia Center on Sustainable International Investment at Columbia University.

Xia Youfu, senior professor of the University of International Business and Economics, agreed. "Uncertainties in the global economy and the bleak outlook have held back investment from developed nations," Xia said.

The World Bank recently predicted rich nations' economic growth would slow to 2.2 percent this year from 2.7 percent in 2010, while the global economy would grow 3.2 percent in 2011.

Breaking down industries in the first six months, the service sector led the growth in attracting FDI with 21.4 percent to reach a total of $28.05 billion, while the FDI growth rate in manufacturing and agriculture were 15.63 percent and 15.13 percent, respectively.

Meanwhile, FDI into middle and western China also witnessed faster growth compared with the coastal regions, albeit in a much smaller absolute amount.

Zhang Shiqing, a professor at the School of Economics of Nankai University, said the ailing US economy and weak US dollar only urged US companies to invest in China's western region because they wish to reduce the cost on labor, energy, infrastructure and commodities there.

"Large-scale US companies are also under domestic pressure in 'giving jobs to Chinese', therefore, they have to consider the feelings of approximately 14 million Americans and deliberately delay or even cut some investment plans in China," he said.

Challenges ahead for digital publishing

Duking it out over China growth

Conoco has not plugged all leaks

Cell phone capital of the world

Hot on the recruitment trail