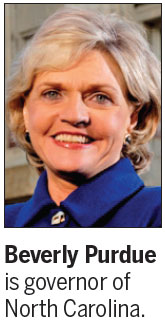 NEW YORK - During a six-day visit to China for the China-US Governor's Forum, the governor of North Carolina will attend 25 meetings with Chinese companies that are at various stages of expansion in the state, part of North Carolina's efforts to attract investments from China.

The governor's tight schedule will also include the ground-breaking ceremony of a China-North Carolina pharmaceutical company named Ascletis Inc in Hangzhou and the opening of the Suzhou Exhibition Center, which promotes North Carolina goods and services.

"We have a low cost of doing business, such as low power costs, a competitive tax structure and a tremendous quality of life with rich educational opportunities," she said.

"Chinese companies are looking for opportunities to invest in the US but are finding it hard to do so, especially in the energy and resources industries where the US government has a strict scrutiny," said Julie Guo, who is a partner of Troutman Sanders LLP and is involved in cross-border investment as well as mergers and acquisitions.

Perdue said the state continues to look for opportunities to create high quality, well-paying jobs and attract businesses looking to expand and make investments in the communities.

"Energy, life sciences and advanced manufacturing are the high-growth sectors that North Carolina is targeting for investment," she said.

China is now North Carolina's No 2 trading partner at about $2.2 billion in exports in 2010. North Carolina's exports to China grew by 25 percent from 2009 to 2010. The top trading commodities between the two partners are computer and electronic products, machinery, chemicals, paper and agriculture products.

"Compared to other international companies, the foreign direct investment by Chinese firms has been modest but it has been growing," the governor said.

North Carolina is home to China's Lenovo US headquarters.

Lenovo announced earlier this year that it has signed a contract with Affiliated Computer Services Inc (ACS), as part of an initiative to expand its global services business. The agreement will create about 300 new jobs in North Carolina's Research Triangle region, near Raleigh.

"Lenovo exemplifies how the state of North Carolina and a global company started in China can mutually benefit from the high-tech, highly innovative workforce we've cultivated here in the Triangle region," said Perdue. "Not only does this business expansion bring significant new employment opportunities to North Carolinians, but it will create a larger ripple effect across our state's economy."

As the unemployment rate still hangs over 9 percent in the US, job creation is an important task for governments.

"This partly explains why the US is keen on attracting investment from China," Guo says.

Angry Birds to land in Shanghai