BEIJING - A top United States envoy had "useful" talks with Chinese officials Thursday on easing the threat of war on the Korean Peninsula, hoping to gain insights about a senior Chinese official's recent meeting with the Democratic People's Republic of Korea's (DPRK) leader Kim Jong-il.

Stephen Bosworth met with Wang Jiarui, head of the International Department of the Communist Party of China Central Committee, Vice-Foreign Minister Zhang Zhijun and other officials. He traveled to Japan later Thursday. 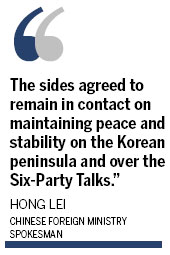 "Ambassador Bosworth and Chinese counterparts had useful consultations on how to coordinate moving forward in dealing with North Korea," a US Embassy statement said.

Chinese Foreign Ministry spokesman Hong Lei confirmed Bosworth's meetings. "The sides agreed to remain in contact on maintaining peace and stability on the Korean Peninsula and over the Six-Party Talks," Hong told a news conference. The talks on the DPRK's nuclear program involve the two Koreas, the US, China, Japan and Russia, but have been on hold for nearly two years.

Bosworth had been expected to ask China for information on last month's talks in Pyongyang between DPRK leader Kim and Chinese State Councilor Dai Bingguo. China has come under growing pressure to push the DPRK to change its behavior after the country traded artillery with the Republic of Korea, killing four people.

UN spokesman Martin Nesirky said both stressed "the need for peace and stability in the region as well as for the resumption of the Six-Party Talks". He said Ban expressed "strong appreciation of China's active efforts" to revive the talks.

The DPRK will be a key issue during Chinese President Hu Jintao's visit to Washington later this month.

In Pyongyang, a DPRK official said Thursday that his government wants a "positive dialogue" with Seoul, saying inter-Korean ties are "now at their worst".

Bosworth met Wednesday in Seoul with ROK officials and said he was hopeful for "serious negotiations" soon on the DPRK.

Crowley said both the US and China want stability on the Korean Peninsula. "Neither one of us wants to see the emergence of a North Korea that is a nuclear state," he said. "We hope that coming out of the visit and the discussions with President Hu Jintao we would have a consensus on the best way to move forward."