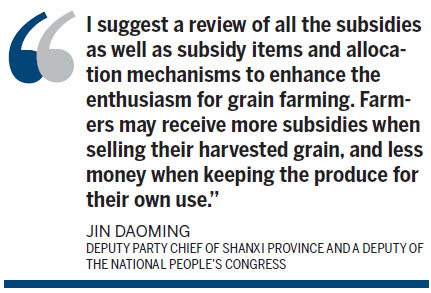 Changes are being urged in China's farmland policies, including reforms in subsidies to farmers, as wasted or deserted land is challenging food security in a country with more than 1.3 billion people, lawmakers and advisers said during the annual session of National People's Congress, China's top legislature.

"The rising waste of farmland across the country is absolutely a big concern amid China's economic development and is worth great attention and effort," Jin Daoming, deputy Party chief of Shanxi province and a deputy of the National People's Congress, told China Daily in an exclusive interview on Sunday.

The waste of land is common in different farming regions as farmers migrate to cities for higher wages, and as subsidies to farmers have reduced their willingness to contract out farmland.

China has been following the household contract responsibility system since the late 1970s, which enables farmers to use land through long-term contracts and keep the produce after paying taxes. It raised productivity and increased agricultural output, both of which were preconditions for nurturing the nation's economic growth, as well as its comprehensive industrialization and urbanization.

"The system, though, has shown not to be very adaptable. It's necessary to review and adjust the policy and further improve the productivity of farmers as well as enhance the efficiency of farmland, which is the key for resolving farmland challenges," Jin said.

He added that the improvement in farmland policy as well as ensuring farmers' interests will be "decisive in building up a well-off society", just as the household contract responsibility system boosted economic expansion in past decades.

"The central government must now put forward specific policies to encourage the circulation of farmland," said Wang Qingxian, acting mayor of Yuncheng in Shanxi and an NPC deputy.

Farmers can contract out their land or can become shareholders of bigger operating companies, earning annual dividends while working as employees at the same time, Wang said on Sunday on the sidelines of the session.

"These moves will significantly enhance farming productivity and agricultural mechanization," he added.

"I suggest a review of all the subsidies as well as subsidy items and allocation mechanisms to enhance the enthusiasm for grain farming. Farmers may receive more subsidies when selling their harvested grain, and less money when keeping the produce for their own use," he said.

Wang Yunlong, an NPC deputy and head of the Agricultural and Rural Affairs Committee of the NPC Standing Committee, said on Sunday on the sidelines of the session that the comparative benefits from farming "are still very low" in China.

Xie Deti, dean of the School of Resources and Environment at the Southwest University in Chongqing, said in a recent survey that a rice farmer in Chongqing only gets a net income of 4,050 yuan per hectare, from planting a season of rice. About 7,500 kg of rice can be produced from one hectare of farmland and is worth about 15,750 yuan, but agricultural resources such as seeds and chemicals cost 2,550 yuan, and manpower in ploughs and harvesting cost about 9,150 yuan.

What's more, the rising costs of agricultural resources and labor almost offset the steady increase of subsidies from the government, said Xie, who is also a member of the National Committee of the Chinese People's Political Consultative Conference.

"The biggest challenge in farming is labor shortages as young people all migrate to cities for high payments and only the children and the old are left to farm," said Guo Fenglian, an NPC deputy and Party chief of Dazhai village in Shanxi. The village gained fame in the 1960s by turning its barren hillsides into high-yielding terraced farmland.

The key is adjusting China's economic structure, and reforms in the rural areas should never stop, she said last week during the NPC session.

Xie from Southwest University said low comparative benefits, draining of rural labors and a lagging agricultural structure all account for farmland desertion, which is widespread and keeps widening. China's total arable land declined from about 128 million hectares in 2001 to about 121 million hectares in 2011.

"The central government has long pledged to keep arable land above 1.8 billion mu (120 million hectares). But the present work is enhancing farmland efficiency, which is key to grain production and is also an urgent and fatal issue to China's food security," said Jin, deputy Party chief of Shanxi.

He added that China's grain output stood at 589.55 billion kg in 2012 and grain output per capita reached 435 kg, higher than the international criteria for grain security, which is 400 kg per capita.

Vice-Minister of Agriculture Chen Xiaohua said at the news conference that China's grain self-sufficiency rate is 98 percent in 2012, higher than the government's target of 95 percent.

The calculation did not include soybean imports, which was 58.38 million metric tons in 2012, according to the General Administration of Customs.

Wang said soybeans have long been listed as a grain in China and should not be excluded in the ratio calculation just because they are mainly used for extracting oil.

"If we imported no soybeans, 400 or 500 million mu (about 27 to 33 million hectares) of farmland would have to be used for planting soybeans and would reduce grain output by 200 billion kg," he said.

Official in US resigns after implication in scandal