Abu Sayyaf group believed to be behind raid on resort

Chinese tourists at a Malaysian resort have left or plan to leave for home after a raid by gunmen who kidnapped a Chinese citizen.

Six armed men raided the Singamata Reef Resort in the eastern state of Sabah at about 10:30 pm local time on Wednesday and forced 29-year-old Gao Huayun from Shanghai onto a waiting speedboat after she took a bath.

They also kidnapped a hotel worker from the Philippines.

It is not clear where the hotel worker, Marcy Dayawan, 40, was abducted.

He added that there could have been someone within the resort working with the suspects.

He also believed that the victims are safe, according intelligence they had so far.

The incident is bound to hit the Malaysian tourism market, a travel specialist said.

"It will undoubtedly be affected by the incident, though it's hard to evaluate how severe it will be," said Liu Ying from Tianjin Jinsheng International Travel Agency.

"Chinese people like to vacation in Malaysia for holidays because it is affordable and nearby. The missing of MH370 plane and this incident have undoubtedly made matters worse," she added.

Beijing urged Malaysian authorities on Thursday to spare no efforts in their search, which was launched immediately.

The Foreign Ministry and China's consulate-general in Kuching, in east Malaysia, immediately dispatched staff to the resort to assist the 61 guests - 59 of them Chinese nationals.

Gao's father called a radio station in Shanghai on Wednesday morning pleading for help. He said his daughter was on vacation in Sabah along with some friends. She just got a letter of admission from a British university on Wednesday.

The kidnapping could be a deliberate act to sour Sino-Malaysian ties, Malaysian newspaper The Star quoted Malaysian Prime Minister Najib Razak as saying.

Najib made the statement after he met with his Australian counterpart Tony Abbott in Perth, Australia.

The gunmen are believed to have headed for the island chain of Tawi Tawi in the southern Philippines, The Star newspaper reported.

A Philippines intelligence official said the attackers were believed to be from the Abu Sayaff group, a militant Muslim group that claims allegiance to al-Qaida and has been implicated in kidnappings before.

In November, suspected Abu Sayyaf militants shot and killed a Taiwan tourist and kidnapped his wife from a resort in the same area. The woman was released a month later in the southern Philippines. Authorities did not say whether a ransom was paid.

China's consulate-general in Kuching has established an emergency hotline for concerned families.

It also warned tourists not to visit remote areas.

China is the third-largest source of visitors to Malaysia. According to Tourism Malaysia, 1.79 million Chinese visited the country last year, a 15 percent rise over the previous year.

Chinese travel agencies have reported a sharp drop in the number of people visiting Malaysia since the disappearance of flight MH370. 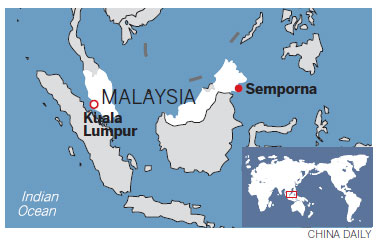