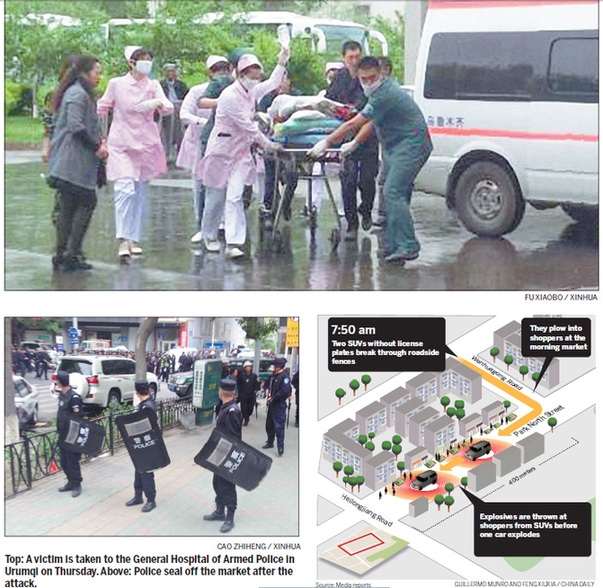 The attack in the Xinjiang Uygur autonomous region that killed 31 people drew condemnation on Thursday from the United States as security analysts and experts called for a stepped up fight against the growing threat of terrorism.

"This is a despicable and outrageous act of violence against innocent civilians and the United States resolutely opposes all forms of terrorism," he said.

"We offer our condolences and sympathies to the victims, their families, and all those affected by this attack,"

At the US State Department, spokeswoman Jen Psaki opened the Thursday daily briefing with a similar statement.

On Thursday morning Beijing Time, two cars without license plates plowed into people at an the market near the People’s Park in Urumqi, the regional capital, with the occupants throwing explosives into the crowd, killing 31 and injuring at least 94 others. The Ministry of Public Security described it as "an extremely severe terrorist incident".

It was the second terrorist attack in Urumqi in less than a month. On April 30, a railway station explosion killed three people, including two attackers, and injured 79 others.

"Of course, this is an organized, long-planned terrorist attack given its nature — their tactics, it’s targeting civilians and causing massive casualties," said Ding Yuan, spokesman with Global Alliance for Preserving the History of WWII in Asia and active community advocate based in California.

The Chinese government should work closely with some countries in the Middle East, Israel and Saudi Arabia for example, to learn from their lessons and experiences on countering terrorism, said Ding, adding that both countries have the best intelligence network on the trainers for the terrorists.

George Koo, member of the Committee of 100, which promotes better ties between China and the US, said people used to think of the origin of acts of terrorism and suicide bombing as specific to the Middle East.

"Since September 11, 2001, we know that there is no geographical limitation on where such acts of violence can take place. Combating terrorism is a world-wide problem and requires the cooperation of all legitimate governments in order to be an effective counter-terror force," Koo said. "In the long run, China needs to find ways to lessen the impact of random violence. Surveillance and prevention is only part of the solution. Finding the roots of the discontent that leads to terrorists willing to commit such acts of desperation is perhaps even more important."

Ma Pinyan, a senior anti-terrorism researcher, said there had been a growing number of attacks and there was also the possibility that more people had become terrorists despite a crackdown on extremist activities in recent years.

"Not enough efforts are being made to solve terrorism at its roots," said Ma, deputy director of the Ethnic and Religious Study Center at Xinjiang Academy of Social Sciences. "The ideological basis for terrorism is religious extremism. The extremists have increased their efforts to indoctrinate people."

Xinjiang Party chief Zhang Chunxian said in March that the penetration of religious extremism had led to more attacks.

Meng Nan, a Central Asian studies researcher at Xinjiang University, said the terrorists had become more focused and sophisticated in their attacks. They chose the morning market for the latest attack because they could cause maximum panic, Meng said. Security checks and patrols at public places such as hospitals, schools, shopping malls and theaters must be strengthened because those areas are major targets for terror attacks, he said.

The attacks in Xinjiang will trigger a decline in the number of tourists to the region during the peak season, he said. Besides economic damage, such attacks "can attract the attention of anti-China forces in the West, who will support the terrorists with funding or weapons", Meng added.

Ma said the timing of the attack, which came as China was hosting the Conference on Interaction and Confidence Building Measures in Asia in Shanghai, also meant that it was deliberately provocative. He said modern forms of communications had also made the fight against terrorism more challenging.

All these factors mean that counterterrorism efforts must be intensified and carried out at all levels, the experts said.

Liu Lei, Xinjiang military command commissar, said religious extremists in the region tended to recruit jobless young people from rural areas. He said most members of the violent or terror-related groups cracked in Xinjiang in recent years were unemployed and between 10 and 25 years old. More must be done to ensure that people at the grassroots have jobs so that they did not fall prey to extremists, Liu said.

Ma said China needed to strengthen counter terrorism cooperation with Afghanistan and Pakistan, which are increasingly becoming bases for the planning of attacks and training of terrorists in Xinjiang.

A special law on counterterrorism was urgently needed, Ma said.

Dai Peng, a professor at People’s Public Security University of China, said the nation should enhance its capacity to combat terrorism in terms of intelligence gathering at border areas.

"Police should take effective measures to cut off their source of funding. Whenever banks discover the illegal inflow or outflow of funds by suspected terrorists, they should freeze the accounts immediately," Dai said. Police and customs officials should maintain pressure in cracking down on arms smuggling, he said.

Zhang Yan and Cui Jia contributed to this story.