The Chinese Students and Scholars Association of the University of California-Santa Barbara is trying to contact families of victims and hosting a mourning event on Tuesday for the three Chinese students identified among the victims of Friday's killing spree.

"We are deeply saddened by these Chinese students who lost their lives. CSSA is trying to contact their families and is ready to provide support needed," Song Gao, president of UCSB CSSA, told China Daily on Monday. "We denounce the poor weapons management here in Isla Vista town."

Authorities say the suspect, Elliot Rodger, 22, stabbed the three Chinese students to death in his apartment in Isla Vista, California on May 23 night before starting a shooting spree that claimed three more lives and ended with Rodger taking his own life.

Gao said one Chinese student at UCSB, who sustained minor injuries while running from the gunshots, was dismissed from the hospital. Gao didn't reveal the student's name.

The sheriff's office identified the three Chinese victims as Cheng Yuan Hong, 20, a computer science student who grew up in Taipei, Taiwan; Weihan Wang, 20, a native of Tianjin municipality on the Chinese mainland; and George Chen, 19, from Ontario, Canada.

Hong and Chen were listed on the apartment's lease. Investigators are working to determine whether Wang was a roommate, according to reports. They were all students at the University of California-Santa Barbara.

Veronika Elizabeth Weiss, 19, and Katherine Breann Cooper, 22, were both shot to death outside the Alpha Phi sorority house near the UC-Santa Barbara campus.

Christopher Ross Michaels-Martinez, of Los Osos, California, was killed when Rodger walked into the deli he was working at and shot him, authorities said. Rodger was found dead of a self-inflicted gunshot wound, police said.

The school set aside Tuesday as a day of mourning and reflection, including a 4 pm memorial service at Harder Stadium organized jointly by students, staff and faculty, according to the statement.

CSSA and the Taiwan Student Association (TSA) are set to host a special mourning event on Tuesday afternoon, particularly to address safety concerns among the Chinese student community.

"Professionals from the Office of International Students and Scholars (OISS) will give a presentation on safety and offer advice," Gao said, adding that some Chinese students who rent apartments in Isla Vista town have expressed safety concerns and wanted to move out.

"We will work with OISS as well as the Consulate General of China in Los Angeles to help Chinese students," Gao said.

In a joint statement on Sunday, UC Santa Barbara chancellor Henry T. Yang and interim executive vice-chancellor Joel Michaelsen said the university's "hearts and prayers go out to the family and friends of those affected".

"This is a period of mourning for all of us," the statement said.

On Saturday, when news of the killings was emerging, Yang wrote: "We are horrified and deeply saddened by the tragic events in Isla Vista last night. While the details are still unfolding, reports are that seven people were killed, including the perpetrator, and several more injured in an appalling act of senseless violence. We grieve for the precious lives lost, and we share in the heartbreak of their families, friends, and classmates. This tragedy profoundly affects our entire university family." 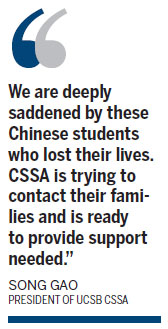 Rodger, whose mother Li Chin Rodger is ethnic Chinese, was the focus of a recent call to police from Hong's apartment. Rodger had accused Hong of stealing $22 worth of candles, Santa Barbara county attorney Joyce E. Dudley said. Rodger performed a citizen's arrest, and when asked if he wanted to press charges, neighbors said, he answered swiftly and decisively: Yes.

Several people who lived in the apartment complex said both of Rodger's roommates rarely socialized with other residents.

"They are extremely nice, very friendly, and very quiet," said Chris Pollard, 22, a neighbor. "They sat around and played video games. They were very nice, genuine guys. They were good kids. They went to school and studied a lot. They didn't do anything bad."

In a YouTube video and an online manifesto that Rodger published before the rampage of violence, he spoke of taking revenge on blonde sorority girls, and the "brutes" whose company they preferred to his own.

While he wrote at length of clashes with past roommates, he did not seem to have as many conflicts with Hong and Chen. But he wrote that he would have to kill his housemates "to secure the entire apartment for myself", adding that he would knock them out with a hammer before slitting their throats.

The sheriff's department did not release any more details about the three young men's deaths, but on Saturday deputies removed bags of evidence from the apartment, including one bag labeled "2 machetes, 1 knife, 1 hammer."

Ignorance of law no excuse for immigrant child abuse

US urged to explain cyberspace spying

Beijing subways to get 4G coverage