As governor of a state adjacent to the nation's political capital, Terry McAuliffe is all about business. And to him that means "it's all about jobs, all about growing and diversifying the economy.

That will be the main mission when the 57-year-old governor of Virginia leads a trade mission to China in October to expand trade and investment ties with China.

"We hope to be signing some deals. Our economic development office has been working hard," McAuliffe told China Daily in an interview on June 5 in Herndon, Virginia, where some 100 visiting entrepreneurs from small and medium-sized Chinese firms were meeting local counterparts for possible partnerships.

The China trip will focus on promoting economic development, tourism, agriculture exports and port activity as well as Chinese companies looking to invest in the US, according to Vince Barnett, director of communications and promotions of Virginia Economic Development Partnership.

McAuliffe has been to China about a dozen times since the mid 1980s, but it will be his first trip since taking office in January this year.

China is already the largest customer of Virginia's agricultural and forestry products. China is also one of the state's largest trade partners and a top investor in Virginia. Former Governor Bob McDonnell opened a trade office in Shanghai last year.

Chinese companies, such as China Telecom, have also set up their foothold in Virginia, a state with a population over 8 million that is home to 700 international companies from 45 countries.

McAuliffe said he is building upon what his predecessors, including McDonnell and Mark Warner, did to create a strong working relationship with China.

He is thankful to the Chinese government for lifting the ban on poultry from Virginia a month ago. It was imposed in 2007 following the outbreak of avian flu in a Virginia farm. In an earlier announcement, McAuliffe said the lift of the ban could boost the state's poultry exports by $20 million or more a year. 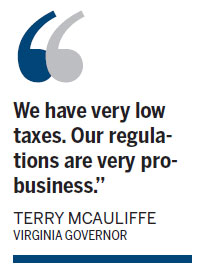 McAuliffe is also excited that starting June 10, Air China will begin its fourth direct flight from Beijing to Dulles International Airport. McAuliffe believes this will help trade and tourism in Virginia.

Besides touting Virginia's rich history as the founding place of the nation back in 1607, McAuliffe said he also wants to convey the message in China that Virginia is the best place to do business in the US, citing Forbes magazine and CNBC, both ranked Virginia as the top state for business in recent years. Virginia was on top of Forbes' 2013 list and No 1 on CNBC's 2011 list. "We have very low taxes. Our regulations are very pro-business," McAuliffe noted.

"But we have so many assets that so many states don't have" he added, noting the state's new international airport and the deepest port on the East Coast that will be capable of handling the gigantic Panamax container ships when the Panama Canal expansion is completed in 2015.

He believes Virginia's education resources will also be a strength and attraction, citing the University of Virginia, the College of William and Mary, Virginia Tech and George Mason University. "Our K-12 is considered the best in the United States of America," said McAuliffe, an important member of the Democratic Party.

After seeing China during his a dozen trips there before, McAuliffe found it a totally different country now compared with the 1980s when he first visited the Asian nation and saw all the bicycles on the streets.

"You go there (now) and it's totally different," he said. "The business climate has totally changed too, very pro-business, very much doing business on a global basis."

Baidu gets ex-Google scientist Ng in race for AI research