An open road lies ahead for unmanned, robot vehicles

China is speeding up the development of unmanned ground vehicles, which will play an important role in future battlefields and civilian sectors, according to a senior expert.

"The UGVs can be used in a wide range of military and civilian fields," said Meng Hong, deputy director of the China North Vehicle Research Institute of China North Industries Group. "In fact, they have been extensively deployed by foreign militaries to handle tasks in hazardous environments."

Since starting in the mid-1990s, China's UGV development has made remarkable strides, but it still lags behind the United States, Germany and Israel, which outdistance their competitors, according to Meng.

"It will take at least five years for China to catch up with these UGV powers when it comes to cutting-edge technologies and expertise in the field such as system integration, environmental perception and decision-making mechanisms," she added.

China North Industries Group, one of the nation's major defense technology and equipment contractors, founded the country's first research center for the development of unmanned ground vehicles. The center is under Meng's institute, which has been largely involved in the development of China's lunar rovers - one of them, Yutu, operated on the moon for several months this year.

The research center was founded to better serve the military, police and civilian users' demands on such vehicles, as well as those of foreign buyers, said Yang Zhuo, deputy general manager of China North Industries Group.

Meng said that the United States has invented a series of UGVs and tested them in wars. Typical of them are the Foster-Miller TALON remotely operated vehicle series, which has performed around 20,000 explosive ordnance disposal missions in Iraq and Afghanistan, and PackBot, also a major aide to US troops in Iraq and Afghanistan. They enable military personnel to investigate suspicious objects and other dangerous scenarios from a safe distance. 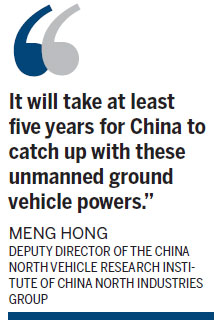 "We have developed our own military UGVs, but we still need some time to industrialize them," she said. "They can be used to conduct anti-terrorist tasks, border patrol, and explosive ordnance detection and disposal."

For civilian users, the institute is researching specialized UGV for extinguishing fires, patrolling and maintaining power grids, and police operations.

Meng said several countries have expressed interest in Chinese UGVs and are in contact with her institute.

A number of institutes in China North Industries Group have helped in the development of photoelectric, laser and information processing systems. Meng's institute has collaborated with Tsinghua University, National University of Defense Technology and Nanjing University of Science and Technology in researching advanced technology, she noted.

Wang Ya'nan, a defense technology expert in Beijing, said unmanned platforms will become indispensable for combat in the future because they are able to conduct many missions that are beyond human capability and reduce casualties.

"The unmanned aerial vehicles are now being widely used in the military and civilian sectors, but UGVs are still far beyond civilian users because of their technical complexity."

Yang from China North Industries Group said the new center will cooperate with its counterparts from Russia, Germany and Finland to boost development, urging it to tap into domestic and international markets as soon as possible.