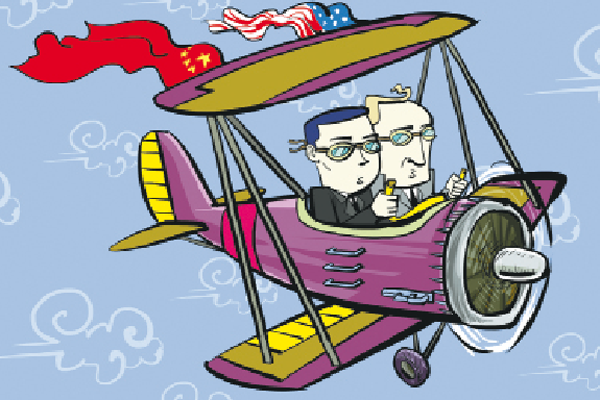 Earlier this month, China and the United States successfully finished their fifth round of the Strategic and Economic Dialogue and the third round of the Strategic Security Dialogue. This round of talks was of great importance because both countries have just had changes of leadership and the bilateral relationship is encountering some difficulties such as cyber security and economic competition.

However, with the maturing of bilateral communication, people in both countries can be cautiously optimistic about the future of Sino-US relations.

Several results from the dialogues deserve to be highlighted.

First, the cyber security working group, which included top officials from both sides, met for the first time before the dialogue convened. Cyber security has been a headache for both countries for nearly a decade. The US has been complaining about Chinese hacking of US government and corporate networks. It has blamed China for stealing technological information for economic benefit without credible evidence. China itself has been suffering huge economic losses from cyber attacks and hacking and is unwilling to take the blame for the attacks on the US.

What makes the issue more complicated is that former US National Security Agency employee Edward Snowden revealed that the US hacked into the backbone servers at Tsinghua University in Beijing and Hong Kong University. Obviously, China is demanding an explanation for these activities. However, this institutionalized dialogue will ease friction and mitigate a possible flashpoint, which otherwise could have led to a larger crisis.

Second, bilateral cooperation on climate change has been renewed. The issue was a hot topic in the first term of the Obama administration, but due to strong opposition from the Republicans the administration's efforts had little effect at home or abroad. After Barack Obama's re-election, climate change resurfaced on his agenda and, during the summit last month in California, President Xi Jinping and President Obama agreed to continue their co-operation on this issue by phasing out greenhouse gases.

This time, both sides agreed to co-operate in five important areas: heavy-duty and other vehicles; smart grids; carbon capture, utilization and storage; collecting and managing greenhouse gas data; energy efficiency in buildings and industry. As the US and China are two leading producers of greenhouse gases, significant collaboration between them is essential to addressing the problem. Their cooperation can set a good example for the world and therefore boost all multilateral negotiations on reducing greenhouse gas emissions.

Third, both countries reaffirmed their commitment to strengthening military-to-military relations. These bilateral relations have long been prey to fluctuations in prevailing security situations. The mutual distrust and suspicion between the two militaries are quite obvious. The latest US Department of Defense assessment of the People's Liberation Army still says that China is challenging the dominant position of the US, which says China "continues to pursue a long-term, comprehensive military modernization program designed to improve the capacity of its armed forces to fight and win short-duration, high-intensity regional military conflict".

While the Chinese military is concerned about the US strategic rebalance toward the Asia-Pacific area, some analysts go further and argue that the US is trying to encircle or contain China. But military relations between the two countries have thawed considerably in the past two years, with many high-level visits and meetings at regional conferences.

During this round of the S&ED, both countries committed to raising military relations to a new level by reaffirming the visit to the US by China's Minister of National Defense in May and a reciprocal visit to China by the US Secretary of Defense in 2014. Both sides also agreed to continue discussions on the rules of behavior for military, air and maritime activities, a move which has long been proposed by military experts from both sides.