China's need for nuclear power is likely to exceed its long-term development target as the nation strives to lower its reliance on coal-fired power and cut air pollution, industry insiders said on Monday.

"As demand for energy has outstripped domestic sources of supply, China's nuclear power industry will expand more quickly than anticipated in the next two decades to better manage the nation's energy structure and deal with environmental problems," said Zheng Mingguang, head of the Shanghai Nuclear Engineering Research and Design Institute.

After the 2011 Fukushima nuclear crisis in Japan, China reduced its installed nuclear power capacity target for 2020 to 58 gigawatts from the original target of 80 to 90 gW. The current installed capacity is 12.6 gW.

But even the lower target would still make China the world's largest nuclear market. And building on the domestic market, State-owned nuclear companies hope to move onto the global stage by selling domestic reactor designs and technology.

That design is based on technology used in the AP 1000 reactor technology of United States-based Westinghouse Electric Co LLC, which is a unit of Japan's Toshiba Corp

Ownership of those IP rights means China could export its reactors. 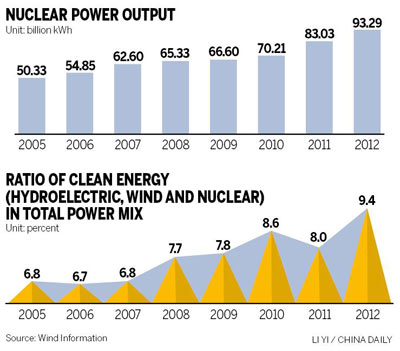 "It is very important for China, because by achieving our own nuclear technology, China could become a strong nuclear power country and establish itself on the international stage," he said.

Countries such as South Africa and the United Kingdom are target markets for CAP1400 technology, Wang said.

Wu Zongxin, a professor of the Institute of Nuclear and New Energy Technology of Tsinghua University, said that it was a good move for China's nuclear power companies to cooperate with Westinghouse, which has the world's most advanced nuclear technology.

"With refinements of design, it is possible for Chinese nuclear power companies to reduce imports of reactor components and designs as well as to be very competitive in the global market," he said.

Over the weekend, the 922-metric-ton dome for unit 1 of the Sanmen nuclear power plant in China's eastern Zhejiang province was raised into position atop the AP1000 reactor building.

Wang Mingdan, deputy general manager of SNPTC, said the placement of the dome at Sanmen represented a milestone, marking the end of the major civil engineering work and the start of the next major stages — installation of key equipment and then commissioning.

"Third-generation nuclear technology features a passive safety system that has a water replenishment capacity to ensure the safety of nuclear stations. It can also be fortified against earthquakes, external floods and other extreme natural disasters," he said.

The unit at Sanmen is expected to be the world's first AP1000 reactor to begin operations, as soon as in 2014.

Four other AP1000 reactors are being built in the US: two at the Vogtle site in Georgia and two at the V.C. Summer site in South Carolina.

US move on ITA talks criticized

US irresponsible for suspending ITA negotiations