"ZTE and the Knicks share many common goals, whether it's the Knicks winning on the court or ZTE becoming a preferred smartphone," Lixin Cheng, chairman and CEO of ZTE USA, said during a news conference in New York.

"Our new partnership advances the mission to serve the community where we live and work, to grow ZTE's brand-awareness and to deliver affordable devices for Knicks fans. And we are both competing to win."

Cheng said the National Basketball Association is a good partner for ZTE because of the sport's global outreach, which gives the two sides "a lot of possibilities to work together". 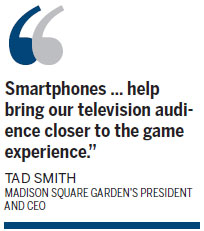 "Smartphones help bring our television audience closer to the game experience," Smith said. "They help us build a deeper relationship between our teams and our fans by helping us deliver the content that fans crave."

As part of its relationship with the Knicks, ZTE will benefit from in-game advertisements in the arena, as well as large LED displays outside, Cheng said.

The Knicks are the third NBA team to partner with ZTE, following the Houston Rockets and the Golden State Warriors.

ZTE is also one of the leading sponsors for the NBA Global Games 2014-2015 initiative, which has already featured two exhibition games in Shanghai (Oct 12) and Beijing (Oct 15).

ZTE, founded in 1985, provides mobile handsets and telecommunications equipment. The Chinese multinational, based in Shenzhen, Guangdong province, has operations in 160 countries.

ZTE USA, a US subsidiary of the ZTE Corp, based in Richardson, Texas, is the fourth- largest smartphone manufacturer in the US.

ZTE also supports a number of NBA team-specific charities, including the Rockets' Season of Giving program, the Knicks' Garden of Dreams foundation and the Warriors Community Phone Drive.

"Our game plan is to continue the momentum for even greater leadership in North America, and we want everyone to know that ZTE is on a fast break in this market," Cheng said.

Signs bearing the ZTE logo will appear at the Knicks' home opener on Wednesday against the Chicago Bulls.

Consensus sought with US on governance of Internet

Mixed bag for China as US Fed ends QE stimulus