Hangzhou is going to be the most attractive Chinese city for Americans, particularly Californians, to visit for two main reasons, at least according to one Chinese official.

"First, American people love Chinese silk and green tea, and now they are welcome to visit Hangzhou, the cradle of silk and tea," Zhao Hongzhong, the vice- chairman of the Hangzhou Tourism Commission, told China Daily.

"In addition, Hangzhou is the city that has the Chinese style with its West Lake and Grand Canal. 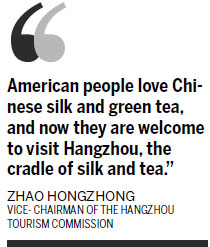 "Second, Hangzhou is a city full of business opportunity," Zhao said. "Alibaba, now the world's second-largest Internet company, was born in Hangzhou city. We would love to help American entrepreneurs to connect with resources in China."

The promotion took place at the Hilton hotel in Universal City, California.

Zhao also announced that a direct flight from Hangzhou to Los Angeles is going to be launched early next year.

"The mayor of Hangzhou, and the Los Angeles mayor, Eric Garcetti, had confirmed this in writing during their letter exchange this year," Zhao said.

The most googled destination in China, Hangzhou recently was ranked as China's fifth best city for international travelers, with more than 3.6 million visitors from all over the world in 2013. About 350,000 American visitors go to Hangzhou every year.

Hangzhou is one of the six oldest capitals in China and an integral part of the world's sixth-largest economic center, the Yangtze River Delta. With 5,000 years of rich history, Hangzhou was established as an important city in Chinese civilization by the year 221 BC. When Marco Polo visited the Hangzhou area 800 years ago, he declared it "the finest and most splendid city in the world".

The city is located on West Lake, a UNESCO World Heritage Site, as well as the Grand Canal, the world's oldest and longest man-made canal.

A visa policy approved by Chinese President Xi Jinping and US President Barack Obama at the Asia-Pacific Economic Cooperation meeting in November extended tourist visas to 10 years and student visas to five years.

Sun and Kathryn Smits, vice-president of International Tourism at the Los Angeles Tourism and Convention Board, said the new visa policy will help promote tourism in Hangzhou immediately.

'Made in China' helps Brazilian consumers

China, US to act on food issues

VP assures on US economic ties