Beijing stressed the importance of its relationship and communication with Hanoi in the statement, but experts warned that Hanoi will continue such provocations to cater to the country’s swelling nationalism and seek sympathy from the international community.

According to the statement on the Foreign Ministry’s website, "As of 5 pm on June 7, there were as many as 63 Vietnamese vessels in the area at the peak, attempting to break through China’s cordon and ramming Chinese government ships a total of 1,416 times.

"Vietnam also sent frogmen and other underwater agents to the area, and dropped large numbers of obstacles, including fishing nets and floating objects" in the waters where a Chinese company’s drilling rig was operating, it said.

Tension has soared since early May, when Vietnam challenged and harassed the rig’s operations near China’s Xisha Islands. Hanoi claims the rig is operating in its exclusive economic zone and on its continental shelf.

Beijing dedicated a large part of its latest statement on the issue to explaining the legitimacy of the rig’s operation and China’s indisputable sovereignty over the Xisha Islands, urging Vietnam to "immediately stop all disruptions of the Chinese operation and withdraw all vessels and personnel from the site".

"China wants good relations with Vietnam, but there are principles that China cannot abandon. The channel of communication between China and Vietnam is open," it said. 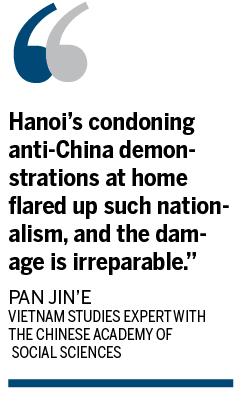 Qi Jianguo, a former Chinese ambassador to Vietnam, said China has exercised great restraint for the sake of bilateral ties and stability in the South China Sea, but Vietnam’s infringement will continue in the immediate future.

Pan Jin’e, a Vietnam studies expert with the Chinese Academy of Social Sciences, said Hanoi aims to present a hard-line image in the maritime issue to cater to the increasing nationalism in Vietnam.

"Hanoi’s condoning anti-China demonstrations at home flared up such nationalism, and the damage is irreparable," Pan said.

Deadly attacks on Chinese and other countries’ personnel and companies in Vietnam in mid-May caused the deaths of four Chinese employees and injuries to hundreds of others. Also, a Vietnamese fishing boat capsized close to China’s rig.

Pan said Vietnam, posturing as a "protester", is seeking international sympathy and "testing Beijing’s response" by displaying unity with the Philippines, whose ties with China were also strained over the South China Sea issue.

The rig, which started drilling on May 2, had completed the first phase of operation and entered the second phase on May 27.

The two locations of operation are about 31 kilometers from both the Zhongjian Island of Xisha Islands and the baseline of the territorial waters of the islands, yet 246 to 288 km from the Vietnamese coast.

Bergdahl says he was tortured by Taliban

China's exports rebound in May

Another US citizen held in DPRK