By May Zhou(China Daily USA)

Chinese, regardless of where they are, seem to stubbornly cling to their native cuisines. To meet their gastronomical need, Chinese restaurants open wherever they go.

And as Houston's Asian population grows - the 2010 US Census put that figure at 6 percent of the city's total population of 2,195,914 - Asian grocery stores and supermarkets pop up to meet their home cooking needs. Not surprisingly, Houston SW Chinatown started with a shopping center where a Chinese supermarket is the focal point.

In 1981, D. T. Wong, originally from Hong Kong, came to Houston from Los Angeles looking for new opportunities. "The downtown Chinatown was full and there was no space for us to get in, so we chose SW Houston and built DIHO Asian Market in 1983," said Wong's nephew Kenneth Li, who came to Houston as a college student with Wong.

Commonly known as DIHO Plaza, it was a joint endeavor by Wong with local developers. The L-shaped DIHO Plaza was based on a Hong Kong model with a supermarket as the anchor store and smaller spaces for restaurants, services or offices. The total space was 14,000 square feet.

Li said Wong chose SW Houston because in the early 1980s Houston was booming with an oil industry and this area was populated with middle-class professionals. "DIHO Supermarket was packed on its opening day," Li recalled. It soon replaced downtown Chinatown's smaller supermarkets and became the primary stop for Chinese immigrants. The seed for SW Chinatown was planted with the opening of DIHO Plaza.

The oil boom soon attracted another Chinese developer, Hong Changrui from Singapore. Hong bought five acres at the corner of Bellaire and Corporate and built an air-conditioned indoor mall along with a supermarket.

In 1987, Wong and Li bought an existing shopping center on Bellaire east of Ranchester and renamed it DIHO Square. Another major supermarket Welcome was opened there to accommodate the growing need of more and more Chinese and Asian immigrants. Later, extra retail space was added to the DIHO Square. 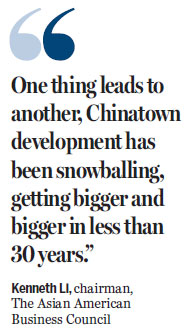 In less than five years, three Chinese supermarkets and shopping centers opened within a quarter mile of each other and all on the north side of Bellaire. Smaller shopping centers and office space are gradually being built by or near them, spreading out like a fan.

According to Christie Qin, vice-president of Southern Chinese Daily News and a veteran community journalist since the early 1980s, during the same period the Vietnamese-Chinese operated supermarket Viet Hoa Food Market moved to the SW Chinatown on Beechnut at Gessner from downtown in 1984, and the first and smaller Hong Kong Food Market was opened at the corner of Harwin and Gessner in 1987. SW Chinatown started to take shape

Then the oil bust happened in late 1980s. However, this actually helped SW Chinatown to further develop. According to Li, "The sharp drop of real estate provided the out-of-state Chinese American investors with opportunities to enter the local market. When economy goes well, nobody wants to sell. The oil bust attracted a lot of the investors from LA and New York to Houston's Chinatown."

According to Qin, during the economic recession in the late 1980s to the early 1990s, Chinese investors bought numerous apartment complexes next to the three shopping centers. The ownership of Happy Village, Lousville, Hamilton and SunBlossom Garden switched to Chinese investors one after another. By Li's account, today over 6,000 apartments are owned by Chinese within the Golden Zone.

China's signal of innovation in Davos