Several ministries and departments of the State Council, China's Cabinet, have responded to public concerns in the past week over the state of the economy and healthcare reform, among other issues.

Questions for the National Development and Reform Commission, the nation's top economic planner, were focused on balancing economic growth by cutting overcapacity, in light of a better than predicted 6.7 percent growth in GDP for the second quarter of the year, as reported by the National Bureau of Statistics.

Rising coal and steel prices, in particular, have prompted some to fear that coal enterprises might be encouraged to increase production, which is contrary to the ongoing process of cutting overcapacity.

Zhao Chenxin, spokesman for the NDRC, responded that China's steel supply as a whole is in surplus because the economy has entered the "new normal", while demand for coal is limited because of the use of new, clean energy; therefore the market is still in a position to force steel and coal companies to cut over-capacity. 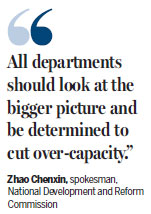 "All departments should look at the bigger picture and be determined to cut over-capacity," he said, adding that the State will further improve market regulation and propel forward the comprehensive cutting of overcapacity.

He also said he was optimistic that the task of cutting raw steel and coal production by 45 million and 250 million tons, respectively, would be completed by the end of the year. He called on local governments to increase efficiency in this regard.

Private investment increased by 3.9 percent in the first six months of the year, 6.2 percentage points lower than the same period last year.

When responding to a question about this drop, Zhao said the State Council had sent nine inspection teams to 18 provinces, municipalities and autonomous regions, which visited more than 500 non-State enterprises. On July 1, the State Council issued a new notice about encouraging private investment, which will be crucial in the coming months.

The National Health and Family Planning Commission shared information about the progress being made in healthcare reform. Yao Jianhong, a senior official in charge of reform at the commission, said that 11 provinces were pioneering the reform, which was going smoothly so far.

Zhu Shufang, head of the Health and Family Planning Commission in South China's Fujian province, said healthcare reform had been accelerated last year, leading to satisfying results. The average pay of medical staff increased, while the price of medicines has fallen, both of which have been welcomed by local residents.

The Ministry of Environmental Protection responded to a media inquiry about several provinces failing to properly deal with waste disposal in rural regions. There have been reports of garbage piling up without being properly processed in Shandong, Guangdong, Hainan and Shaanxi provinces.

Tian Weiyong, an official in charge of environmental inspection at the ministry, said they had already urged local governments to deal with waste disposal in the correct way. The long-term disposal processing mechanism is also being upgraded in rural areas, so that the problem will not be repeated in the future, Tian said.