Firms seek to raise profile in US 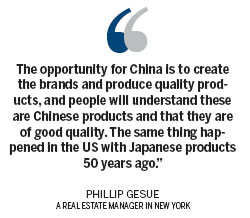 Traditionally anonymous Chinese manufacturers are now setting up shop in the United States.

It is a universally acknowledged truth that Chinese products are so ubiquitous in the West that an ordinary US consumer would find it very difficult to live a day without any product "made in China".

What is less known is the pain that plagued a typical Chinese manufacturer for years: Despite widespread popularity, the quality of their goods is much less recognized, and only a minor part of the value created goes into their pockets.

Of course, few of them would like to succumb to that position. Many Chinese manufacturers are relentlessly improving their quality and climbing up the value chain. Some are actively seeking acquisitions around the globe.

Traditional exporters, while maintaining their factories back home, also begin to establish stores in developed markets like the US to improve their visibility and try to build something that they traditionally lack: a brand.

It is a tall order. Developed markets, unlike developing ones, have no shortage of established brands, which take years to cultivate. Chinese exporters, who traditionally indulge in factories rather than showrooms, are not accustomed to dealing with foreign customers.

Some even acknowledge that when they are doing original equipment manufacturer business in China, they even don't know to whom their products are sold.

"We used to be the peasants plowing in the mud field. Now we have to put on our suits and be salesmen," said Kobe Zhang, vice-president of a Guangdong-based audio equipment maker who is now doing business in California, when describing the hardship of transforming his role.

When asked the reason be moves his business overseas, he said: "Our sales in past years increased, but profits dropped significantly. We'll die if we don't expand. We have no choice."

For many other manufacturers, Zhang's words are truth to them as well.

"Why are we so tired? It is because we don't have high-enough standards. Domestic competition, to put it frankly, is a competition over price," said Li Deqing, general manager of an automatic-door manufacturer.

Cao Yuejin, president of Taotao Inc, an all-terrain vehicle maker and exporter, feels as strongly as Zhang. He gets outraged as he recalls when inferior ATVs that his peers sold in Dubai, the United Arab Emirates, ruined the reputation of Chinese ATVs in that part of the world.

"The products were really terrible," he said angrily. "Since then, I could not expand my business in the Middle East."

Frustrated by years of price competition and undeserved bad reputations, some Chinese companies are beginning to operate the way foreign brands do. After working for a couple of years for foreign brands, Chinese manufacturers know better than anyone else about the bonus of selling proprietary products.

"Take a $75 pair of Guess jeans, for example. The manufacturer gets maybe $5; transportation: $5; distribution: $25; the brand, $50," a Chinese jeans manufacturer said.

Even many fair-minded US customers know the value of manufacturing.

When asked which products in his house are "made in China", Phillip Gesue, a real estate manager in New York, replied: "Perhaps all of them."

But why do the Chinese fail to create their own brands?

"One of the reasons is there is a perception that China is providing low-quality products. If you are making inexpensive things, it's hard to make people think of you having high-end value," he said.

"The second reason is Chinese companies, which started 10 to 20 years ago, became manufacturers for foreign brands."

The problem with manufacturing for foreign brands is that China does not get the benefit of those brands' reputation, Gesue said.

But he believes that eventually China could move beyond this phase.

"The opportunity for China is to create the brands and produce quality products, and people will understand these are Chinese products and that they are of good quality. The same thing happened in the US with Japanese products 50 years ago."

Despite all the charges against products that are "made in China", Dong Yuejun, president of Ningbo Smal Electrics Co Ltd, chose to focus her attention on product quality for 20 years.

After being an original design manufacturer supplier for an international brand for eight years, she set up her US company in 2009 in New York and in 2011, began to sell heaters and air purifiers that were labeled with her own brand Smal, something she had dreamed of doing for years.

"In eight years (as an ODM supplier), we didn't have a single quality accident, and we always delivered on time. So we built a very good reputation among buyers," Dong said proudly.

Thomas Cappadona, a former CEO of a company that was one of Dong's clients, said he admired her standards, which he said is why he joined Dong's company after he retired from his original company.

"I've been with Dong for a long time. She has very high standards and very good quality in her Ningbo factory, and she delivers on time. For me, (working with her) is an opportunity that our competitors don't have," he said.

Chang Liang, chairman of Aland, a Jiangsu-based nutritional supplement company, also said quality is his company's primary focus. Starting as a domestic bulk drug producer, his company in 2007 began its transition to a nutrient producer and sought to acquire a US company to tap the US market.

In 2010, Aland successfully acquired International Vitamin Corp, a US nutritional supplements manufacturer. In just three years, the company's sales almost tripled and no employee was laid off because of the buyout.

Chang said a major reason for the company's success is its products passed the certification of US Pharmacopeial Convention, an authoritative third-party certifier. So far, Aland is the only Chinese nutrient company to receive that certification. Now IVC's products have entered many major pharmacies across the US.

Chang said Chinese companies have different perspectives about quality control. "Take mug making as an example. Chinese companies only care about the finished product. On the other hand, Americans also care about every step of the manufacturing process. In this respect, we have learned a lot from them."

Of course, in Chinese manufacturers' crusade into the US market, there is inevitably fierce competition, sometimes, even dirty tricks. Dong from Smal admitted she has encountered many local battles.

"Transforming from an ODM supplier to a brand owner means you are turning your previous clients into direct rivals. And they will fight back," she said.

At first, according to Dong, one rival claimed her products had patent issues. After failing to find evidence of that, he tried to discredit Dong by calling her buyers and saying he would file a patent infringement lawsuit against her. Having applied for all her patents in both China and the US, Dong replied that she would sue him in China if he sues her in the US.

Her rival eventually gave up.

"My principle is, I will not bother you if you don't bother me. To grow, I need a peaceful environment," Dong said.

But more often than not, Chinese manufacturers find enormous opportunities cooperating with talented people and US businesses. Many Chinese companies in the US hire most of their employees locally.

"It is impossible for a Chinese company to run a US business without a professional local team," Dong said. "You would miss out on a lot of information without them. And in many areas like legal and customer relations, Chinese ways of tackling problems do not apply here."

Chang keenly felt this at the beginning of running his US team. At the end of the first year after Aland acquired IVC, he wrote in a draft letter to his senior US executives: "You worked hard this year. Your working result is well."

"You should not say that in this way. Otherwise, they will not understand," one of his colleague, a Chinese who had lived in the US for many years, said after reading the draft.

"You should tell them explicitly that they did not meet their targets, and the board of directors is very upset about that. Put it more clearly: 'You will be out of here if you do this again next year'." his colleague said.

Besides creating jobs, Chinese businessmen said their largest contribution to the local market is still their products.

By directly establishing distribution networks in the US, they get rid of several stages between the factories and the stores, thus saving the markup in the process. This has ensured their profit margins while offering local consumers a fairer price.

Cao from Taotao said by getting rid of the distributors and building his own sales network, he successfully cut retail prices by 10 percent and improved his profit margin.

His US customers also enjoyed the benefit. The ATVs he sells use an average $100 less in gasoline than an average car, which made the products very popular with young people in cities such as Las Vegas.

"I think the concept of 'made in China' has been discussed too much, as if China is the only beneficiary. In fact, in this globalized world, 'made in China' actually is 'made with China'," said Song Ru'an, deputy consul-general of China's consulate in San Francisco.

Special: Chinese enterprises in the US

Peak strives to reach top of US market


'Served by China' targets 'Made in China'

'Made in China' sweeps world in past decade

Video: 'Made in China' draws reporter to us

'Made in China' gains acceptance
8.03K