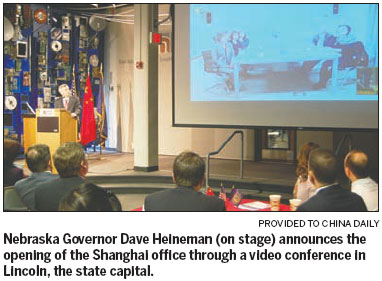 Governor Dave Heineman announced on Monday that the Nebraska Center China, was opened in Shanghai. "By opening this trade office, we are expanding our international trade efforts," he said in a statement.

Nebraska's exports to China totaled more than $380 million in 2012, up from nearly $279 million in 2010. "With more growth opportunities predicted for Nebraska agribusiness in China, the time is right for this new office," Nebraska Agriculture Director Greg Ibach said in a statement.

About 50 percent of Nebraska's exports are agriculture-related products and represented about $3.8 billion in 2011, according to the most recent data available. International trade directly supports 30,700 state jobs, according to the Nebraska Center China website. As of January, Nebraska had a 3.8 percent unemployment rate, the second-lowest in the nation after North Dakota.

The trade office will also actively seek more Chinese investment in Nebraska, which is also interested in developing trade in alternative energy and water technology.

The Paulson Institute, a non-partisan organization with an office in Beijing that promotes economic growth in China, will assist Nebraska in its value-added agriculture exports.

Grace Gui will be executive director of the trade office in Shanghai. Gui worked for four years with Shanghai Pudong Development Bank, and then moved to the US.

She lived in Omaha where she served as system administrator and senior database administrator for Staples from 2001 to last year.

Although Nebraska native business mogul Warren Buffett helps put the state's name on Chinese investors' radar, Heineman said last year that Nebraska itself is attractive because it offers low-cost energy, a business-friendly tax environment and the ability to transport goods anywhere in the US in 48 hours due to its central location.

"If China and America are strong, the world's going to be. Economically, we need to be connected, and we need to have a strong relationship," Heineman said. "In my state, we would like to do our part."