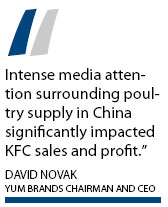 Yum Brands Inc, the biggest foreign fast-food operator in China, said adverse publicity over tainted chicken and an outbreak of bird flu hurt its earnings and sales in the country, leading to an overall 26 percent drop in first-quarter profit for the company behind KFC and Pizza Hut.

Yum, which draws half its revenue from China, is seen as a model for US companies doing business in the country. Although operating profit from China plunged 41 percent during the quarter ended March 23, Novak vowed to "stay the course" and proceed with a plan to develop at least 700 new restaurants in China this year.

"We have complete confidence in a full sales recovery," he said.

Yum's China business consists mainly of KFC and Pizza Hut. Early this year, chicken supplied to KFC locations in China was found to contain what the company described as "excess levels of chemical residue", triggering a Chinese government investigation into the practices of a former Yum supplier.

After publicity about the situation hurt the company's fourth-quarter results, Yum launched a campaign aimed at reassuring customers that its food is safe to eat.

Although "negative media surrounding poultry supply in China has subsided", Novak said, the outbreak of a strain of the avian flu virus that has killed 20 people and infected more than 100 others, mostly in eastern China, has "adversely affected" Yum's sales recovery.

"We continue to remind consumers that properly cooked chicken is perfectly safe to eat," the CEO said.

Analysts surveyed by data provider FactSet had expected the Kentucky-based company to post earnings, excluding special items, of 60 cents a share on $2.56 billion in revenue.

Sales at locations in China open at least one year declined 20 percent in April, Yum said. By comparison, same-store sales increased by 1 percent at Yum Restaurants International and 2 percent in the United States. Operating profit rose 19 percent for the international unit and 5 percent in the US.

In an April 10 filing with the US Securities and Exchange Commission, Yum said the deadly avian-flu outbreak in China would have a "significant, negative impact" on sales this month at its KFC stores in the country.

Some analysts have said the company's problems in China run deeper than the effect of negative publicity over the tainted-chicken scare and avian flu. Among its challenges is growing competition from local quick-service restaurants.

Phone bookings for taxis in Beijing

No let up in home price rises