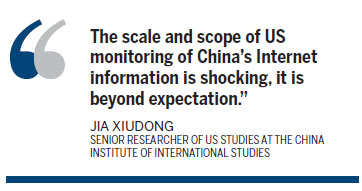 The case of Edward Snowden - the former US National Security Agency contractor who revealed massive secret surveillance programs carried out by Washington - took a dramatic turn on Sunday when he suddenly left Hong Kong, following the disclosure of still more US hacking activities against China.

Snowden landed in Moscow on Sunday morning, but, according to reports, Russia was not his final destination. WikiLeaks, an anti-secrecy organization which has been helping Snowden evade extradition to the US, said on Sunday that Snowden is "bound for the Republic of Ecuador via a safe route for the purposes of asylum".

Ricardo Patino Aroca, Ecuador's foreign minister, tweeted after Snowden's arrival in Moscow that his government had received an asylum request from Snowden.

Since there is no direct flight between Moscow and Ecuador's capital of Quito, Snowden is booked to fly first to Havana, Cuba, on Monday, Russian news agency Interfax reported. There had been speculation earlier that Snowden might seek asylum in Iceland.

Hours after Snowden boarded a Russian Aeroflot passenger flight, the Hong Kong government released a statement saying that Snowden left "on his own accord for a third country through a lawful and normal channel".

The statement said the documentation of the US request for extradition did not "fully comply with the legal requirements under Hong Kong law" and "has yet to have sufficient information to process the request for provisional warrant of arrest, there is no legal basis to restrict Mr. Snowden from leaving Hong Kong".

Michael O'Hanlon, a senior fellow at the Brookings Institution, told CNN on Sunday that he would not be surprised if Snowden were even given asylum in Russia, because the US would do the same thing if the US got a hold of someone of this kind from Russia.

While some in the US are disappointed that Snowden was not arrested in Hong Kong, the public attention in China on Sunday has been focused on Snowden's new revelation that the US has been hacking into Chinese mobile phone companies and a backbone network to steal text messages and data of millions of Chinese citizens.

The South China Morning Post revealed Snowden's claims, a few hours before his departure for Moscow.

Chinese Foreign Ministry spokeswoman Hua Chunying said Beijing is concerned with reports of US government hacking on China and has made appropriate representations to the US.

A commentary by Xinhua News Agency on Sunday said Snowden's disclosures of US spying activities in China have "put Washington in a really awkward situation". "Washington should come clean about its record first," it said. "It has to share with the world the range, extent and intent of its clandestine hacking programs."

Jia Xiudong, a senior researcher of US studies at the China Institute of International Studies, said: "The scale and scope of US monitoring of China's Internet information is shocking, it is beyond expectation."

"The US is the largest source of foreign cyber- attacks on China," Jia added. "Now Snowden's claims show that many such attacks may be backed by the US government."

Snowden, who turned 30 last Friday, said that "the NSA does all kinds of things like hacking Chinese cell phone companies to steal all of your SMS data". The NSA also made sustained attacks on network backbones at Tsinghua University and computers at the Hong Kong headquarters of telecom service provider Pacnet, he said.

In one single day in January, at least 63 computers and servers at Tsinghua University were hacked by the NSA, Snowden said.

Tsinghua is home to one of the Chinese mainland's six major backbone networks, the China Education and Research Network, known as CERNET, from where Internet data from millions of Chinese citizens could be mined.

Pacnet owns one of the most extensive fiber-optic submarine cable networks. It recently signed major deals with China's top mobile phone companies, and owns more than 46,000 kilometers of fiber-optic cables.

The cables connect its regional data centers across the Asia-Pacific region, including the Chinese mainland, Hong Kong, Taiwan, Japan, South Korea and Singapore.

The South China Morning Post said Snowden provided the information on June 12. The documents listed operational details of specific attacks on computers, including Internet protocol addresses, dates of attacks and whether a computer was still being monitored remotely.

"What is the connection between Tsinghua's CERNET and terrorism?" Jia asked.

"Obviously US Internet attacks against China are not for anti-terrorism efforts, as Washington has argued, but for other reasons that might include commercial and strategic motives," Jia said.

"The US owes an explanation to China, and the world."

However, Jia said Washington might, as always, avoid facing the issue and he did not expect it to stop hacking China.

Cybersecurity is expected to be in spotlight in next month's China-US Strategic and Economic Dialogue in Washington.