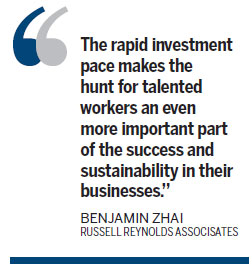 Talent acquisition is the No 1 challenge for many Chinese companies in the United States, and for some, going local is the answer, reports Zhang Yuwei in New York.

When Ni Pin, president of Wanxiang America, talks about the company's early days in the United States, he recalls challenges for the then newcomer to the auto- parts business, one of the world's most competitive markets.

And the biggest challenge in 1995 when Wanxiang America was established in Elgin, Illinois, just outside of Chicago, was to find the right people for the company, said Ni, now in his late 40s. The Chinese executive needed to find ways by himself to expand his team - three workers, including him - for the company to be up and running. "It wasn't that easy at all because there were the language and cultural barriers," he said.

Things have dramatically changed for Wanxiang America - and for Chinese investments in the US.

The company now has a workforce of about 6,000 in 14 states, and Chinese investment in the US reached some $6.5 billion last year, according to the New York-based Rhodium Group, which tracks overseas Chinese investment. The total investment volume reached $25.4 billion between 2000 and the first quarter of 2013.

Most of the 95 Chinese companies that are on Fortune's Global 500 list have operations in the US. Some grow their businesses like Wanxiang; others remain just an office with very little business coming out of it.

Several deals announced in June - including the current AMC owner Wanda's $1 billion hotel project in New York and CEO of Soho China's purchase of a $1.4 billion stake in Manhattan's iconic General Motors building - show that the volume of Chinese investment is expected to pick up in the coming months and years.

"The rapid investment pace makes the hunt for talented workers an even more important part of the success and sustainability in their businesses," said Benjamin Zhai, head of the China desk at Russell Reynolds Associates, a leading executive search and assessment firm in New York.

Zhai, who relocated to the US from China in April to lead the firm's new desk, said some Chinese clients of both State and privately owned companies will pay a premium price - up to $1 million - to hire the right top executive.

"Global M&A (mergers and acquisitions) trends show that Chinese investors have invested more not only in terms of volume, but also value and brand awareness," said Zhai. "Chinese firms' talent acquisition has evolved over the last 10 years, with more willing to show the money. "

Chinese investors are more connected to the local environment and with hiring more local talent, he said. Wanxiang America is an excellent example. Local hires make up almost the entire workforce in Elgin, with fewer than a dozen Chinese working at the company's headquarters in the city about 40 miles northwest of Chicago.

Wanxiang America is a subsidiary of the Wanxiang Group, based in Hangzhou, Zhejiang province in eastern China. Wanxiang has about 12,500 employees globally in China, the US, Europe, South America and Australia. It's one of the largest privately owned companies in China, with annual revenue of more than $13 billion.

The group's American arm often has made headlines with its takeover of bankrupt US companies. Earlier this year, it acquired Massachusetts-based lithium-ion battery maker A123 Systems for $257 million. That deal, Ni said, has added some 1,500 people to its US workforce.

Ni said one condition they consider in a potential deal is if the company has a functioning management team. "We give the team the power to execute their decisions and that helps the company to grow," he said. "At the end of the day, it's not about how smart you are, it's about how you can create the right team.

And he added: "We don't send anyone from China or Chicago - they all manage by themselves. This is the Wanxiang culture - what we call - 'to be your own boss'. You've got to give them the room and freedom to grow and they can be the hero in their own development."

Going local is "the only way" for the New York operation of Beijing-based Xinyuan Real Estate Co Ltd. Last September, the US-listed company acquired a parcel of land in the Williamsburg section of Brooklyn for $54.2 million. The company is waiting to get permits from the state to kick off its condo-building project, which John Liang, its local general manager, said isn't another Chinatown because it targets high-end buyers with some units costing $4 million.

Liang leads eight people in New York and three others on the West Coast. He was hired last year. He was CFO of a Qingdao-based real-estate developer funded by American private-equity funds. Originally from China, he's no stranger to the US, where he came to study and work in 1991.