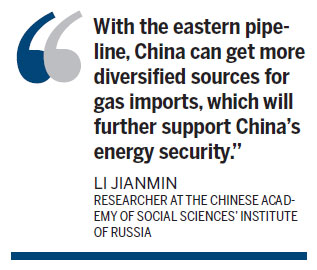 China is determined to implement structural reform even though its economy may grow at a slower pace as a result, and urges other countries to shoulder the common responsibility of keeping the global economic recovery on track.

President Xi Jinping also is seeking faster reform of international economic governance by increasing the voice and decision-making rights of the emerging economies.

"To solve the long-term challenges of economic development in China, we must implement structural reform, even though we may let our economy grow at a lower rate,"Xi said at the first session of the G20 leaders summit on Thursday afternoon in St. Petersburg, Russia.

China's economy grew at an average rate of 9.8 percent annually from 1978 to 2012, but it has slowed for consecutive 13 quarters since the first quarter of 2010. The rate for the first half of this year was 7.6 percent.

Xi has ruled out the possibility that China will launch new stimulus plans to pick up its economy. Xi said China will pay attention to the quality of growth, and cut environmental pollution and energy waste by shifting to consumption.

Observers said Xi has brought pragmatic and bold messages both to his views on China's development, global growth and economic governance.

At his first presence at a G20 summit, Xi has also pledged to reform the global economic and trade architecture and make it fairer and inclusive.

"We urgently need to implement quota and governance reform to the International Monetary Fund, which should reflect each country's weight in the global economy," he said.

Xi is also urging reform of the basket of currencies with so-called special drawing rights in the IMF, suggesting that China and other emerging economies have the right to include their currencies in the basket, which now consists of the US dollar, British pound, the euro, and Japanese yen.

Xi also pledged that China is determined to keep the global economy open, and opposes any trade protectionism.

Zhang Yuyan, director of the Institute of World Economics and Politics at the Chinese Academy of Social Sciences, said Xi's stances have reflected the fact that the issues of growth and employment are the common challenges of different economies because the global recovery momentum is still weak.

"The deep-rooted structural imbalance has not been eliminated since it was exposed after the global financial crisis," Zhang said.

Responding to Xi's calling of collective responsibility in boosting global growth, Eswar Prasad, senior fellow of global economy and development at the Brookings Institution, said that at least two of the major engines of growth - the US and China - appear to be stabilizing, and the two economies might once again become the main drivers of world growth.

Nicola Casarini, research fellow at the EU Institute for Security Studies, told China Daily that Xi's speech aims to both reassure the G20 partners about the state of the Chinese economy and the pace of economic reforms as well as to reiterate the demand for the reform of the quota system of the IMF.

John Kirton, co-director of the G20 Research Group at the Munk School of Global A+ airs at the University of Toronto, said that from the beginning of the G20 summit, China has played a central role in the G20. "It knows its own economic rise critically depends on financial stability, open markets and growth in the major economies of the G8 and its big emerging partners in the BRICS bloc as well," Kirton said.

Chen Weihua in Washington, Zhang Yuwei in New York, Zhang Chunyan in London and Chen Jia in Beijing contributed to this story.