Afghanistan and Pakistan move into focus of cooperative efforts

China and the United States are stepping up cooperation in Afghanistan and Pakistan as the US plans to draw down its military presence next year after nearly 13 years of Afghan war, according to a senior US diplomat.

He described the effort as one of making Afghanistan a crossroads and regional hub for trade and investment in the region.

"We've consulted regularly and closely with China on issues related to Afghanistan and Pakistan," Dobbins told a press conference in Washington on Monday.

Acknowledging that China has a close relationship with Pakistan, Dobbins said Chinese and American interests in this respect are largely aligned.

"I think China, like the United States, is concerned about the growth of violent militancy in the region. China, like the US, would like to see Afghanistan stabilized and no longer becoming a source for potential instability in the region," said Dobbins, who was picked by Secretary of State John Kerry for the job on May 10 of this year and who also served as the George W. Bush administration's first special envoy to Afghanistan in the wake of the Sept 11, 2001 terrorists attacks.

Dobbins was joined on Sept 9 by Lu Kang, minister of the Chinese embassy in Washington and Afghan Ambassador to the US Eklil Ahmad Hakimi at a State Department ceremony for a China-US joint training program for 15 young Afghan diplomats. After a two-week training in the US, the group will go to China later this year for the second leg of the program.

"And this is only one of several areas in which the US and China are collaborating in this kind of advisory and capacity-building for the Afghans," Dobbins said.

It is the second year for the training program, which was first unveiled in May of last year at the China Foreign Affairs University in Beijing. Representatives from the Chinese and US embassies in Kabul jointly selected the group of promising Afghan junior diplomats, according to the US State Department. 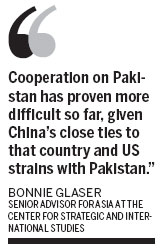 In his congratulatory letter last week, Chinese Foreign Minister Wang Yi praised the program as a successful model for China-US cooperation in a third country.